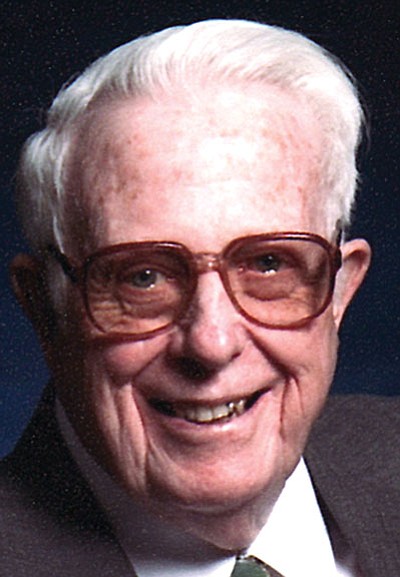 William "Bill" Carson lost the battle with cancer on Tuesday, June 21, 2011, and he is now with his Lord and Savior, Jesus Christ. Bill's greatest desire was to live his life in such a way that it would glorify God through loving his wife and family, serving others and playing his violin.

Bill was born on Sept. 20, 1926, in Brooklyn, N.Y. He graduated from Providence Bible Institute, attended Taylor University where he met the love of his life, Neva. In 1952, Bill and Neva were married. He graduated from Wheaton College with a B.S. degree in Education in 1953. Along with his wife, Neva, he taught in a two-room country schoolhouse in Otis, Maine. In 1967, Bill and Neva were led by the Lord to move to Kotzebue, Alaska, an Eskimo village north of the Arctic Circle where they were teachers for the Bureau of Indian Affairs. While in Alaska, Bill became a licensed private pilot and enjoyed flying, hunting and fishing. He was active in the local church and was licensed as a preacher. In 1976, they moved to the Navajo reservation in Tuba City, Ariz. There they continued to teach in a BIA high school. Over the years, Bill taught many subjects including general science, chemistry, physics, flight ground school, and art. Bill and Neva retired as school teachers in 1988 and moved to Kingman in 1990. Bill was an accomplished concert violinist and taught violin. He was instrumental in starting the Mohave Community Orchestra. He also played with the Lake Havasu Community Orchestra. He continued to play the violin until the fall of 2010. Bill was a member of Kingman Missionary Alliance Church where he served as an elder, was head of the missions committee and helped teach children. Recently they have been part of Hilltop Four Square Church where he served by playing his violin. He was also a member of the Gideons, who provide Bibles throughout the world.

Bill has now joined his formerly handicapped son, Billy, in heaven. He leaves behind, temporarily, his loving wife, Neva; his daughters, Gloria (Timothy) Hagquist of the Philippines and Audrey (Joel) Hetrick of Kingman. He also leaves behind his grandson, Staff Sgt. Stephen Jackson, USAF, of Great Falls, Mont.; and granddaughter, Shauna Hetrick of Kingman, and one brother, Herbert Carson, of Long Island, N.Y.

Bill's life was characterized by holding firmly to the truth set in Proverbs 3:5-6, "Trust in the Lord with all your heart and lean not on your own understanding; in all your ways acknowledge Him, and He will make you paths straight" (NIV). He was a faithful husband, caring father, inspiring grandfather, and amazing role model.

He will be greatly missed and remembered in our hearts.

In lieu of flowers, donations may be designated to WorldVenture (Gloria and Timothy's ministry in the Philippines), Gideons International, or Mohave County Arizona Retarded Citizens (MCARC) on Airway.