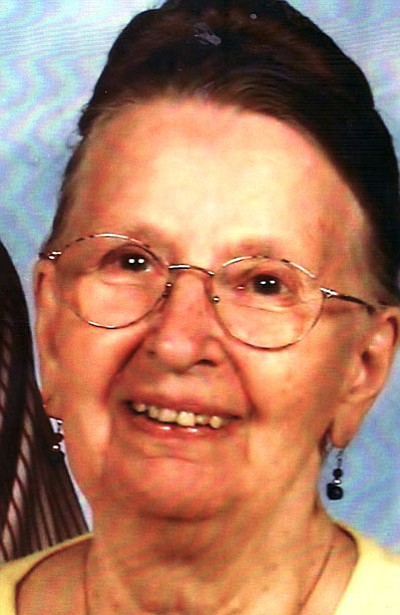 Jeanette was born Nov. 10, 1929, in rural Belgrade, Minn., the daughter of Theodore and Amy (Christiansen) Plumhoff. On April 21, 1948, she married Vernon G. Torgerson in Belgrade. Jeanette and family moved to Kingman in September of 1960. Jeanette was employed by the Kingman School District as a teacher's assistant for 20 years.

She is survived by her seven children, Gary A. Torgerson of San Diego, Dale V. Torgerson of Prescott Valley, Jane S. Frank and Richard of Riverside, Iowa, Melvin D. Torgerson and Rose of Kingman, Iris M. Halbert and Chuck of Norfolk, Neb., VerJean A. Fox and Jeff of Kingman and Nonette L. Saville and Jeff of Flagstaff; 17 grandchildren and 10 great-grandchildren. She is also survived by her sister, Arlene Kuperus and George of Eagle Bend, Minn.; her brother, Wendell Plumhoff and Agnes of Benson, Minn., and younger sister, Barbara Plumhoff of St. Paul, Minn.

Jeanette was a member as well as an officer for several years of Beta Sigma Phi Sorority. She was also a member of Women Making History, Church Women United and a longtime member and coordinator of the Altar Guild at Grace Lutheran Church as well as a member of the Hand Bell Choir.