Jobless rate up to start 2011
Mohave hit 11.5 percent in January 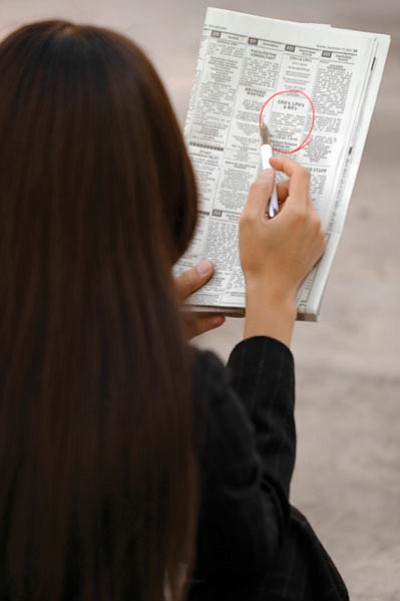 KINGMAN - This year got off to a bad start for local unemployment, according to a new report released Thursday by the Arizona Department of Commerce.

Unemployment in the Kingman-Lake Havasu metropolitan statistical area increased by nearly a full point from December to January, rising from 10.7 to 11.5 percent. According to the report, the rise was due in part to an increase in the overall labor force without a corresponding increase in jobs. The labor force, which includes anyone age 16 and up who is either employed or actively looking for work, rose by about 900 in January to 91,500. By comparison, the number of actual jobholders in the county remained unchanged at 80,900, though nonfarm job sectors actually experienced a net loss of about 400 jobs.

Year-over-year, unemployment is below where it was this time last January, when the rate stood at 12.3 percent. Still, the sharp jump marks a major departure from the relative stability of the last several months, which saw the unemployment rate drop steadily from 11.1 percent in August to 10.5 percent in December.

Overall nonfarm employment fell by about 400 jobs to 45,000 in January, virtually unchanged from the same period a year ago. The job losses were confined primarily to the service industry, with the retail trade, business services, leisure/hospitality and miscellaneous services sectors each experiencing a drop of about 100 jobs each. No job sectors in either the goods- or service-based industries posted any gains for the period.

The state at large didn't fair much better, with the total number of unemployed Arizonans rising from 292,600 to about 316,600 in January. The raw unemployment rate also rose from 9.2 to an even 10 percent, though when adjusted for seasonal shifts, the rate actually remained unchanged at 9.6 percent. But even that's a cold comfort when compared to the national unemployment rate, which actually dropped in January from 9.4 to 9 percent.

None of Arizona's other metro areas came out particularly well in January, with each experiencing some rise in its unemployment rate. Tucson's was the most modest, edging up from 8.4 to 9.1 percent - still the state's lowest rate. The Phoenix/Mesa/Glendale MSA saw its rate rise from 8.5 to 9.3 percent while Flagstaff jumped from 8.5 to 9.5 percent and Prescott from 10 to 11.1 percent.