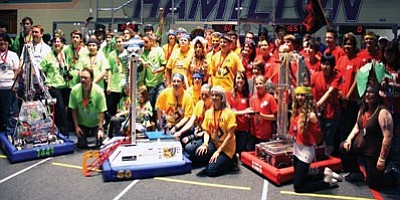 Courtesy<br> Bionic Bulldogs Team 60 is pictured with Teams 2449 and 1165 after their second place finish at the FIRST Robotics Competition Arizona Regional last Saturday.

KINGMAN - Kingman's FIRST Robotics Team 60 returned from the Arizona Regional competition this past weekend with an impressive second place finish and a college scholarship for one of its team members.

Kingman Academy High senior Kyle Glenn applied for one of the many scholarships offered through FIRST and was awarded $1000 from the Grainger Corporation. Kyle plans on attending the University of Arizona in the fall to study engineering.

Each year FIRST provides an engineering challenge in the form of a game. This year's challenge involves robots hanging inflated tubes of various shapes on elevated scoring pegs and mini-bots climbing 10-foot poles in under 10 seconds. The higher the tube, the higher the score. Additional points can be scored by having a robot hang an "ubertube" during an autonomous period at the beginning of the match and by hanging the game pieces so that they form the FIRST logo (triangle, circle, square).

After a day and a half of qualifying, the Bionic Bulldogs were seeded third out of 42 teams with an 8-1-1 record, missing the top seed by a single point in its last match.

After the qualifying rounds, the top teams chose their alliance partners for the elimination portion of the competition. Team 60 selected Team 2449, Out of Orbit Robotics from Tempe, and Team 1165, Team Paradise from Paradise Valley High to be part of its second-seeded alliance. Each round of the elimination portion of the competition is a best two-out-of three.

In the quarter-finals, Team 60's alliance faced off against the alliance of Team 1011 from the Sonoran Science Academy; Team 1212 from Seton Catholic High School; and Team 3785, the Gila Monsters from Yuma. The Bionic Bulldogs caught a break in the first match when their robot was contacted by an opponent's robot during the mini-bot portion of the match. That penalty resulted in a red card for the opposing alliance, forfeiting the match to Team 60's alliance. In the second match, the Bionic Bulldogs and their alliance partners advanced to the semi-finals with a 37-24 victory.

In the semi-finals, Team 60's alliance went up against the alliance of Team 1492, Team Caution from Tempe; Team 1726, the NERDS from Buena High School; and Team 3577 from Notre Dame Preparatory High School in Scottsdale. The Bionic Bulldogs and their alliance partners lost the first match 48-33. After a change in strategy, Team 60's alliance earned a spot in the finals by winning the next two matches 24-18 and 59-38.

In the finals, the Bionic Bulldogs and their alliance partners faced the top-seeded alliance of Team 842, Falcon Robotics; Team 330, the Beach Bots from Hermosa Beach, Calif.; and Team 2662 from Tolleson High School. In the first match, Team 60's alliance was outscored 76-44. A mechanical failure on the Bionic Bulldogs' robot prevented it from competing in the final match, resulting in the lopsided final score of 112-5 and the second place finish.

Team 60 will compete next in the Las Vegas Regional at the Thomas & Mack Center on the UNLV campus April 1.