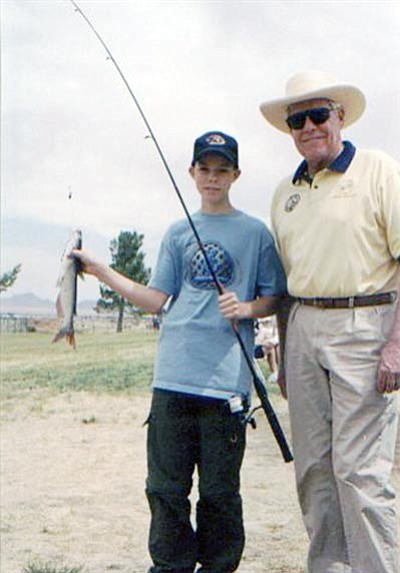 DON MARTIN/For the Miner<br> Former AZG&F Commissioner Hays Gilstrap congratulates a young angler on a catfish he caught. If AZG&F can’t restock fish, scenes like this will be lost.

Anglers in northwest Arizona are blessed with a lot of fishable waters within the borders of Mohave County. We have more than 1,000 miles of shoreline on the mighty Colorado River, and we have Lakes Mead, Mohave, Havasu and Alamo to test our fishing skills.

Whether anglers are looking for striped bass, largemouth bass, smallmouth bass, catfish or rainbow trout, these fish can be found in the county in good numbers.

There are thousands and thousands of anglers, who are local or from around the state and nation who fish these waters each year, and we are indeed fortunate that most of the time we have plenty of fish to try for.

But in other areas of the state, there are a lot more anglers than there are fish to catch. So the Arizona Game & Fish Department has to use a system where they stock fish into available waters. Each year, the state stocks more than three million fish in lakes, streams and rivers. While most of these fish are trout, they also stock warm water species such as bass and catfish as well.

This long standing practice is done under the auspices of the U.S. Fish and Wildlife Service, who provide a lot of dollars for these efforts.

Under what is called the National Environmental Protection Act process, state agencies are required to put out for public comment an Environmental Assessment to comply with federal regulations.

The NEPA process requires that the public have the opportunity to comment and have input into federal decisions and consider the impacts to human and natural environments. Since the AZG&F receives federal funds from the USF&WS that are used, in part, to fund statewide stocking programs, both the USF&WS and the AZG&F have to go through this process.

There are 36 species of native fish in Arizona, and 19 are listed as federally threatened or endangered. Eight have become extinct.

It is known that stocking can have an adverse effect on these native species, but the AZG&F knows these facts, and they mitigate for the stocking of non-natives such as trout, catfish and bass.

This time there are three actions that are proposed under the EA.

For simplicity, I'll refer to them as the no-action proposal, the reduced-stocking alternative and the proposed action.

Under the reduced-stocking alternative, there would be 101 waters that would still be stocked, but 66 sites that are currently receiving fish would not receive any fish in the future. On that list are a number of high-use locations you might recognize, including Tonto Creek, Christopher Creek, Haigler Creek, Kinnikinick Lake, LaPaz County Park Lagoon, Upper Lake Mary and Big Lake.

The proposed-action alternative would stock the highest number of sites and is the most similar of the alternatives to the current AZ G&F stocking program. Under this action, 167 sites throughout Arizona would be stocked with up to 18 different cold and warm-water fish.

Arizona has roughly 420,000 anglers who fish collectively more than four million days a year. The economic impact to the state is more than $1.3 billion.

According to the AZG&F, about one-third of those angler days are supported by the stocking program.

On the local level, we all know that tourism is huge in Mohave County. Fishing is an important industry to the county and the state, and I believe we must support the department's effort to keep stocking fish in Arizona.

I would urge all anglers to weigh in on this issue and support the proposed action.

You can see the entire EA by going to www.azgfd.gov/fishea.

You can also see a hard copy of this document by going to any regional office, including the one at 5325 N. Stockton Hill Road, or at the Phoenix headquarters.

Comments on this draft EA can be submitted by e-mail to fw2fa@fws.gov or fishaz@azgfd.gov. They have to be in by May 11, and it is believed that the Mohave Sportsman Club, the county's largest outdoor recreational club, and the Mohave County Board of Supervisors will be weighing in on this issue.

But it is important that you and I, the individual angler or sportsman or concerned citizen, also weigh in on this very important issue.

But get involved, and let the government know how you feel.