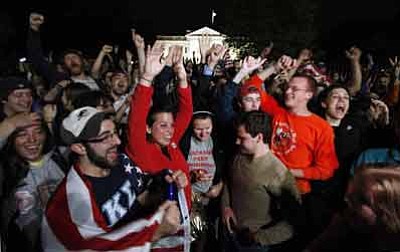 WASHINGTON - Osama bin Laden, the glowering mastermind behind the Sept. 11, 2001, terror attacks that murdered thousands of Americans, was killed in an operation led by the United States, President Barack Obama said Sunday.

A small team of Americans killed bin Laden in a firefight Sunday at a compound in Pakistan, the president said in a dramatic late-night statement at the White House.

A jubilant crowd gathered outside the White House as word spread of bin Laden's death after a global manhunt that lasted nearly a decade.

"Justice has been done," the president said.

Former President George W. Bush, who was in office on the day of the attacks, issued a written statement hailing bin Laden's death as a momentous achievement. "The fight against terror goes on, but tonight America has sent an unmistakable message: No matter how long it takes, justice will be done," he said.

Few details were immediately available of the operation that resulted in bin Laden's death, although the president said none of the Americans involved was harmed.

The development came just months before the 10th anniversary of the Sept. 11 attacks on the World Trade Centers and Pentagon, orchestrated by bin Laden's al-Qaida organization, that killed more than 3,000 people.

The attacks set off a chain of events that led the United States into wars in Afghanistan, and then Iraq, and America's entire intelligence apparatus was overhauled to counter the threat of more terror attacks at home.

Al-Qaida was also blamed for the 1998 bombings of two U.S. embassies in Africa that killed 231 people and the 2000 attack on the USS Cole that killed 17 American sailors in Yemen, as well as countless other plots, some successful and some foiled.

A senior administration official says Obama gave the final order for U.S. officials to go after bin Laden on Friday. The official added that a small team found their quarry hiding in a large home in an affluent suburb of Islamabad. The raid occurred in the early morning hours Sunday.

Obama spoke with Bush and former President Bill Clinton Sunday night to inform them of the developments.

The attacks a decade ago seemed to come out of nowhere, even though al-Qaida had previously damaged American targets overseas.

The terrorists hijacked planes, flew one of them into one of Manhattan's Twin Towers - and, moments later, into the other one. Both buildings collapsed, trapping thousands inside and claiming the lives of firefighters and others who had rushed to help them.

A third plane slammed into the Pentagon, defacing the symbol of America's military night. A fourth crashed in rural Pennsylvania after passengers overpowered the hijackers and forced it down - before it could hit its intended target in Washington.

Obama struck a less than boastful tone in his brief announcement, although he said the death of bin Laden was "the most significant achievement to date in our nation's effort to defeat al-Qaida.

"His death does not mark the end of our effort. There's no doubt that al-Qaida will continue to pursue attacks against us. We must and we will remain vigilant," he added.

Moments after he spoke, American officials cautioned that the events could lead to heightened threats against the United States.