New home for a rare frog 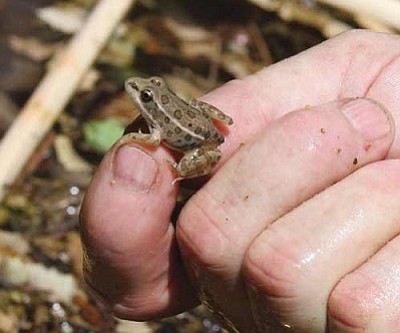 KINGMAN - April 29 was "Save the Frogs Day" and several local wildlife biologists and specialists from Arizona and Nevada observed the day quite literally as they worked in the wilds near Kingman to help benefit a rare species of frog.

In a cooperative effort between the Arizona Game and Fish Department, Bureau of Land Management, U.S. Fish and Wildlife Service and the University of Nevada-Las Vegas, about a dozen people hiked into the craggy wilderness of the Black Mountains near Highway 68, just west of Golden Valley. On their backs they carried buckets filled with water and a precious cargo: young adults and tadpoles of the Relict Leopard Frog.

According to frog specialist Mike Sredl of the AZG&FD, this species of frog is believed to only number, at most, about 2,000 individuals. The frog is so rare it was once believed to be extinct, but a small population was discovered in the extreme northwest corner of Arizona and a few other locations nearby. (There are other species of leopard frogs found elsewhere.)

Scientists have collected some of the eggs the frogs lay en masse in hidden pools, hoping to raise tadpoles (frog young) they can release in currently unoccupied but otherwise promising habitat within the frog's range. Suitable habitat includes a flowing, permanent water source, pools deep enough for tadpoles and frogs to hide, and a lack of non-native competitors/predators. When frog populations are only located in a few areas, those populations are susceptible to disease or disaster. As AZG&FD Region III Non-Game Specialist John Kraft put it, having these frogs in several different locations "avoids having all your eggs in one basket."

Suitable habitat had been located in the Black Mountains, near Union Pass and Highway 68. Several springs of water create a ribbon of green threading through an ocean of desert brown far from the beaten path. Environmental assessments were conducted and agreements reached between the AZG&FD, USFWS, BLM and UNLV. There are two other Relict Leopard Frog populations in Arizona; the Black Mountains site will be the third. (Nevada has several sites as well.)

Rebeca Rivera from UNLV Biological Life Sciences raised the tadpoles that scientists collected and was one of those transporting tadpoles. And so on this day devoted to "Save the Frogs," about a dozen people strapped heavy buckets of water and frogs onto their backs and hiked almost an hour into rough desert wilderness. Most were from the AZG&FD, UNLV and USFWS, but trekkers also included members of the media.

At the end of the journey lay several springs that biologists had determined to be good release sites for the hoped-for new population of frogs. Volunteers formed a human dis-assembly line as brush was taken out to make one pool deeper and clearer than before.

Finally, the buckets were brought to the water's edge and about 70 tadpoles and a dozen small "froglets" were gently released. Some dove almost immediately into the deepest ends while others hopped onto sticks and rocks and got a look at their new surroundings and their human benefactors.

It is hoped that this frog population will take hold and provide the Relict Leopard Frog with another buffer against oblivion. The frogs are not classified as endangered but are rare enough to be a "Species of Special Concern." Biologists will continue to monitor the population and may transplant more frogs later on.

Amphibian populations around the world are declining. Some causes are known, such as the fungal disease chytridiomycosis and the introduction of non-native species such as bullfrogs and crayfish, which compete with or prey upon native frogs. Other causes are less certain. Through efforts like this one, it is hoped that humans can help stay the tide and keep native ecosystems healthy, diverse and functioning far into the future.

Amphibians like the frog are important indicators of the health of the environment because of their sensitivity to toxins and other environmental factors. If they can do well, it indicates their environment is healthy.