From probation to paradise for Friend Walker 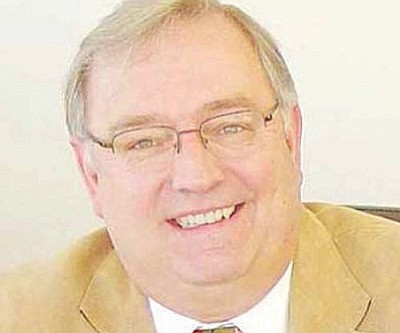 KINGMAN - The face of the Mohave County Probation Department is leaving for greener pastures - literally.

Friend Walker, who has served as the chief probation officer since Oct. 2006, is leaving the dusty southwest and moving to Saipan, which is the largest in a chain of islands in the United States Commonwealth of Northern Mariana Islands in the Pacific Ocean some 6,000 miles away from Kingman.

There he will serve as Federal Security director, where he will oversee federal security at airports and the Transportation Security Administration's security activities.

Walker's last day with the Probation Office is Wednesday. Last week, his co-workers threw him a tropical themed going-away party.

"I am really going to miss the men and women here," he said. "I've never worked with a finer group of people in my entire career."

He was also a police chief in Collinsville, Ill., as well as an assistant special agent in charge for the Department of Defense Criminal Investigation Task Force at Fort Belvoir, Va.

Under Walker's watch, the Probation Department has instituted a number of successful programs, including one that helps juvenile offenders obtain their GEDs. To date, 65 kids have walked out of the detention center with their diploma.

The department also worked with Chuck Spotts, vice president of instruction and student services at Mohave Community College, to provide up to seven hours credit in free online classes for those looking to continue their education beyond high school. The program was the first of its kind in Arizona.

A number of other changes and incentives offered to offenders helped the Probation Department save the state $1.7 million by reducing the number of probationers who return to prison.

The Probation Department was supposed to receive $684,000, or 40 percent of what it saved the state, but that money was swept by the legislature during budgeting sessions.

"But it doesn't mean we didn't do the right thing and we did it better than anyone else in the state," Walker said.

Walker married Lou Ann Hill-Glentz last October. He said his new bride is both anxious and excited about the move. The couple plans on bringing only the possessions they can carry with them on the plane. The rest will be sold off, except for their house, which they rent.

The flight to Guam, which is an hour south of Saipan, takes about 15 hours. The couple will fly first to Hawaii for more information on his assignment before continuing on to the islands a few days later.

They aren't sure what to expect when they arrive. Walker said Guam is more metropolitan while Saipan is more rural. But they fully expect to take advantage of the clear blue waters, world-class beaches and temperatures that are always between 79 and 89 degrees year-round.

A replacement for Walker has yet to be named.