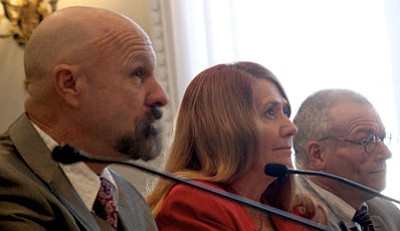 WASHINGTON - A bill that would open 1 million acres near Grand Canyon National Park to new uranium mining was hailed Thursday as an economic boon and derided as a threat to the park's wilderness and tourism value.

The bill would block the Department of the Interior from imposing a 20-year ban on new mines in the so-called Arizona Strip - a ban the department formally recommended last week.

The bill's sponsor, Rep. Trent Franks, R-Glendale, and three other Arizona Republicans testified that the bill would create much-needed jobs in the northern part of the state and boost U.S. energy production.

"The Obama administration's effort to make 1 million acres of uranium-rich land in Arizona off-limits for future uranium mining is a step in precisely the wrong direction for the American economy," Franks testified to a House Natural Resources subcommittee.

But Rep. Raul Grijalva, D-Tucson, said the area must be approached with exceptional caution because, "It's the Grand Canyon, stupid." He introduced a bill earlier this year that would do the opposite of Franks', by permanently blocking new uranium mines in the area.

"The uncertainty is to a degree that caution is the operative word," Grijalva said after the hearing.

The Interior Department closed the land to new mining claims in 2009 to study a long-term ban. On Oct. 26 it recommended blocking new mining on all 1 million acres of the Arizona Strip for 20 years, a ban that Interior Secretary Ken Salazar has already publicly supported.

The final decision is Salazar's, who has to wait for a 30-day public comment period on the recommendation to end.

Eleven mines that have already been approved can still operate under a ban, which department officials said would help them assess the long-term impacts of modern uranium mining in the area.

The Grand Canyon "took many millennia to create, and the process of making important decisions about its future should not be cut short," said Bureau of Land Management Director Robert Abbey in testimony prepared for the subcommittee.

But supporters of Franks' bill said the risks that uranium mining might taint the Colorado River and the national park area are too remote to justify a ban.

If a flash flood swept 66,000 pounds of uranium into the Colorado River, it would increase the water's uranium content from 4 parts per billion to 4.02 ppb, well below the federally recommended limit of 30 ppb, said Karen Wenrich, a geologist who studied the area for both public and private organizations.

Wenrich's testimony was challenged by Grijalva, who asked her about a Securities and Exchange Commission filing that said she stood to profit from new mining claims in the region. Wenrich responded that her research was done before she was in a position to receive any benefits and the possible compensation had "absolutely no bearing" on her findings.

"I challenge you to find where my facts are erroneous," she said.

But contamination from mining is not the only concern for Stephen Verkamp, a member of the Nature Conservancy and other environmental groups who grew up near the Grand Canyon. Dust from scores of new trucks hauling ore would become a massive problem if more mines break ground, he said.

"Anyone who tells me that a dust situation is not going to be critical, I don't think they understand the place," Verkamp said.

County Supervisor Buster Johnson said an increase in mining goes hand in hand with an increase in tourism because it would improve the area's economy - and therefore its appeal.

He also said tourism jobs do not give back to local residents as well as mining jobs because they are lower-paying and more likely to hire transitional workers who will not do things like buy property.

Beyond the back-and-forth of new mines' environmental and economic impacts, the ban and legislation raise a question about a 27-year-old land-use agreement between Congress and the Department of the Interior.

The Arizona Republicans said Salazar's proposed ban would go against the Arizona Wilderness Act of 1984, which laid out possible uses for federal lands in Arizona. But a staffer who was involved in creating the 1984 act testified that the moratorium does not violate it.

"Neither the history nor the provisions of Arizona Wilderness Act" are in conflict with the proposed mining ban, said Mark Trautwein, who worked on the legislation under then-Arizona Rep. Morris Udall.

"On the contrary, the two are entirely different in scope and purpose," he said in prepared testimony.

But even if the Department of the Interior stayed within the letter of the law, it violated the spirit of the 1984 agreement, said Rep. Rob Bishop, R-Utah, who supports Franks' bill.