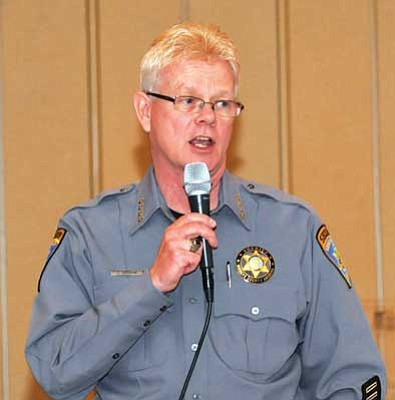 Sheahan briefed the attendees on Operation Fast and Furious, the Bureau of Alcohol, Tobacco and Firearms gunrunning sting operation that allowed 2,000 weapons to be smuggled across the U.S.-Mexico border, with many ending up in drug cartel possession.

"Of the 2,000 Operation Fast and Furious weapons, between 160 and 170 have been found at various crime scenes in Mexico, and one was found at the scene of where a U.S. Border Patrol Agent Brian Terry was murdered north of Tucson," Sheahan said. "There are still about 1,400 of those weapons unaccounted for.

"I, along with the other nine sheriffs in Arizona, have demanded that a special counsel be appointed to investigate the roles of Attorney General Eric Holder and the other top administration officials involved in Operation Fast and Furious."

Sheahan also briefed the members and guests about an accident in Golden Valley Oct. 27, in which four of the eight illegal immigrants were hospitalized following a rollover of a vehicle they were in. Sheahan said the accident involved a vehicle being pursued by U.S. Border Patrol and that his department is tasked with investigating the accident.

"The problem is the Border Patrol agents who were involved have 'lawyered up' because their union told them not to make any statements in regard to the incident," Sheahan said.

Prior to Sheriff Sheahan speaking, State Representative Doris Goodale gave a presentation about the proposed Arizona congressional and legislative district maps that will be in place for next year's legislative and congressional races.