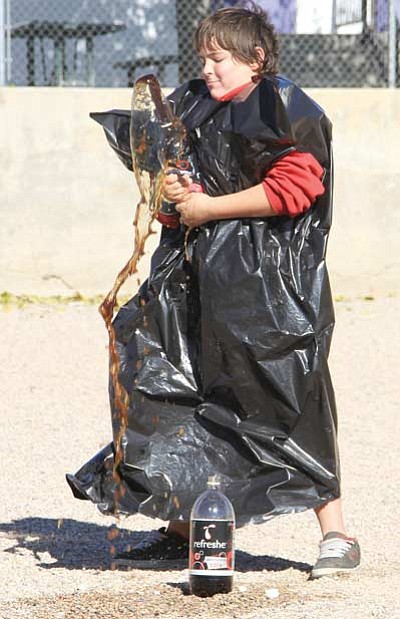 KINGMAN - One of the best ways for teachers to tap into the creative and curious nature of children is science.

At Palo Christi Elementary that's exactly what teachers are doing, so much so that the National Center for Education Achievement awarded the school "Higher Performing" recognition in science.

"The kids are what it's all about," said Palo Christi Principal Gary Blanton. "Our teachers have been teaching predominantly hands-on science."

Labs, computer work, experiments and other ways to get students involved in the creative learning process are status quo at Palo Christi.

"We're not just teaching out of textbooks," Blanton said.

Higher Performing recognition is nothing to scoff at.

The NCEA uses one of two measures and sometimes both over a three-year period to identify Higher Performing schools. One, it looks at consistent improvement in student achievement from previous years. Two, it looks at absolute student achievement using the exceeds performance results from the spring Arizona Instrument for Measuring Standards test results, according to the NCEA. Palo Christi was evaluated with the latter measurement.

Also, the NCEA controls measurement by accounting for demographics in order to ensure schools throughout the state have an equal opportunity to make the list.

More than 80 percent of Palo Christi students are considered low income, so the school was compared to schools with comparable low-income percentages.

In science at Palo Christi, 66 percent of the fourth-grade students tested during the 2010-2011 school year met the state's standard, while 21 percent exceeded expectations and met NCEA's career and college ready benchmark.

Career and college ready targets account for students who exceed expectations of state standards, which according to the NCEA, is a much more appropriate measure of whether or not students are on track to succeed in college and careers. The targets create a ramp that follows students throughout their K-12 careers, so that at any point, teachers can see - and adapt to - whether or not a student is on the path to college and a career.

Kingman Unified School District Assessment Director Gretchen Dorner said the NCEA Higher Performing list reveals success that may not have been revealed through other measurements. In the case of Palo Christi, the school's recognition shows that at a time when math and reading dominate the dialogue focused on state education standards, science is not left off the education radar, she said.

Roger Jacks, KUSD superintendent, said it's exciting to be recognized during an era of increased accountability and rigor. This award, which celebrates educational success, is meaningful, he added.

"It shows that teachers are teaching to standards," Jacks said.

Blanton agreed with Jacks and Dorner, saying Palo Christi teachers explain standards to students very well by moving away from the numbers and focusing on students' needs.

"It's all a big team," Blanton said. "And the hard work is paying off."

Open communication between students, parents, teachers and administrators illustrates this school-as-team idea. Blanton, an administrator in the KUSD system for 20 years, said weekly progress reports go home with students, and that there is absolutely no hidden information.