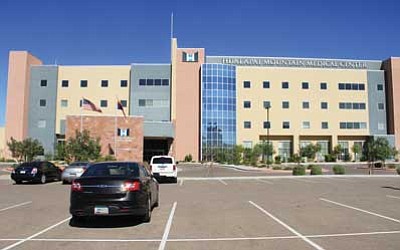 JC AMBERLYN/Miner<br /><br /><!-- 1upcrlf2 -->The parking lot at Hualapai Mountain Medical Center was almost empty Thursday. The hospital, which opened in October 2009, has been purchased by Kingman Regional Medical Center.

KRMC made an offer to buy the hospital for $31 million last month. MedCath's board accepted the offer earlier this month. The $70 million facility opened on Oct. 15, 2009, with more than 170 employees, 70 private beds and room for 36 additional beds.

HMMC employees have been working on closing the facility for the last few weeks, said Drew Markell, director of marketing and public relations for the hospital. The last two patients were released earlier this week and staff has been removing logos and packing and inventorying supplies and equipment for the last few days. All of the medical supplies, drugs and patient records will be transferred over to KRMC, he said.

The emergency room was the last part of the hospital to close, Markell said. It remained open Friday night until the very last minute in case a patient arrived.

KRMC's Director of Development and Public Relations Jamie Taylor said the road to the hospital will be blocked off, the doors will be locked and KRMC will have a security detail at the hospital 24 hours a day, seven days a week until KRMC reopens the facility. An ambulance will also be stationed at the entrance to HMMC's emergency room in case someone is brought to the facility while it is closed.

Right now, KRMC has plans to turn the building into an outpatient surgery facility, Taylor said. They may use the building for other services too, but they won't know what else they can offer until they get into the building, she said.

"We've gotten a lot of good suggestions from the public," Taylor said.

KRMC will also have to apply to re-license the facility with the state, she said. The hospital is hoping to reopen the facility in two to four months.

In the meantime, around 220 people who worked at HMMC are scrambling to find new jobs. MedCath will continue to pay salaries until the end of October, Markell said.

The company has also been trying to help employees find new jobs, he said. KRMC, Valley View Medical Center in Fort Mohave and hospitals in Las Vegas and Gallup, N.M., have held job fairs at HMMC.

"Any time we got something in the mail or by email or saw it online, we've passed it on to our employees," Markell said.

Despite all the help, many employees are still upset over the sale of the facility, he said. Much of the shock and anger has worn off, but there are still some feelings of disappointment.

That sense of disappointment extends to some of the doctors who helped establish HMMC. Many of the doctors at HMMC have privileges at KRMC and will continue to see patients in Kingman, Markell said.

Others have threatened legal action. Dr. Robert Lock stated last month that he believed the sale would create an illegal monopoly on medical services in the community. He said he planned to file paperwork alerting the federal government to the sale.

But he may not have anyone to fight. MedCath CEO and President Ed French retired Sept. 20 and recent financial statements on the company's website indicate that the governing board has decided to sell its three remaining hospitals and possibly dissolve the company altogether.