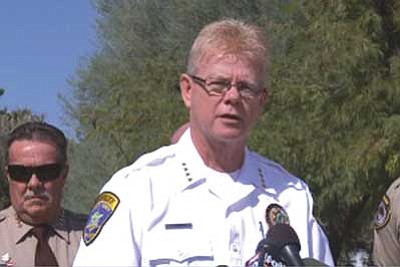 PHOENIX - Ten Arizona sheriffs demanded on Friday that a special counsel be appointed to investigate the roles of U.S. Attorney General Eric Holder and other top administration officials in a gunrunning probe that allowed weapons to find their way into criminals' hands.

"All of this doesn't smell right," said Pinal County Sheriff Paul Babeu, joined by several other sheriffs at a news conference outside the State Capitol. "I believe that this is a much larger scandal than anything that took place at Watergate."

The sheriffs called for Holder and other top Department of Justice officials to take responsibility for allowing 2,000 guns to be obtained by Mexican drug cartels and other criminals. During Operation Fast and Furious, agents allowed middlemen, known as straw buyers, to illegally purchase guns in hopes of tracking them once they reached other members of criminal networks.

The investigation came under fire after U.S. Border Patrol agent Brian Terry was killed in a shootout last year north of Nogales and two assault rifles purchased during the operation were recovered at the scene.

"We've been betrayed by our government in Washington, D.C., and we need answers," Mohave County Sheriff Tom Sheahan said.

Earlier this year, Kenneth Melson, acting director of the Bureau of Alcohol, Tobacco, Firearms and Explosives, was reassigned within the Justice Department. Dennis Burke, the U.S. attorney for the District of Arizona, resigned.

These are clues that something bigger is going on, Babeu said.

"We're demanding the truth from our government because you put my deputies and the police officers of our state and the Southwest in harm's way, and that is not forgivable," he said.

Noting that 1,500 of the guns remain unaccounted for, the sheriffs said the operation left American law officers facing well-armed criminals.

"Any reasonable person would know that if you give weapons to violent, dangerous people that they are going to use them," Yavapai County Sheriff Scott Mascher said. "And that's obviously what happened." Allowing those guns to be purchased by straw buyers has been a "dishonor" to American law enforcement, said La Paz County Sheriff Don Lowery.

"We are stopping vehicles with high-powered weapons," he said. "And with the budget the way it is we can't afford to buy weapons that match what these guys have."

Cochise County Sheriff Larry Dever said Burke and other officials have been made scapegoats.

"Whoever made these decisions is well above his pay grade," Dever said. "Who it is needs to be accountable, and that's all we're asking."

"When someone drives a getaway car, they are accessory to the crime and prosecuted by the main perp," Babeu said. "How can we not look at our own government in the same fashion?"

A White House representative referred a reporter to Obama's remarks Thursday in which he expressed confidence in Holder and in the process of determining accountability.

"He's indicated that he was not aware of what was happening in Fast and Furious; certainly I was not," Obama said at a news conference. "And I think both he and I would have been very unhappy if somebody had suggested that guns were allowed to pass through that could have been prevented by the United States of America."

A news release prepared by Babeu's office listed 10 of the state's 15 sheriffs as supporters of the call for a special counsel. Sheriffs Joe Arpaio of Maricopa County and Clarence Dupnik of Pima County weren't among them, and representatives of their offices declined to say why.