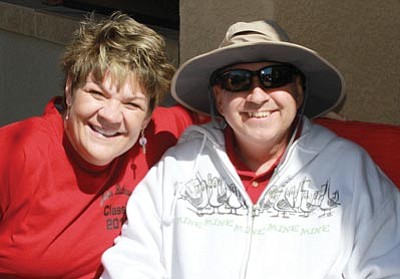 JC AMBERLYN/Miner<br>Anne and John Bathauer at a golf fundraising event for the Kingman man and his family last month at Cerbat Cliffs Golf Course.

Kingman Little League North celebrated the start of the new season Saturday while also celebrating the life of one of their own.

John Bathauer, a parent, coach, board member and former president of Kingman North, lost his battle with an aggressive form of melanoma skin cancer Friday. He was 46.

His family was there for the opening the ceremonies, and his youngest boys, Mike and Matt, threw out the ceremonial first pitch - something that their father was originally scheduled to do.

"We are going to dedicate our season to him," North president Lee Pitts said.

North players will wear a special patch for the rest of the regular season and possibly during the All Star tournaments, if Pitts can get it approved by District 9.

While Bathauer was involved with so many youth sports leagues throughout Kingman, it was North Little League where he made his mark, serving as a board member for a number of years along with becoming president. He coached the North 10-11 All Star team to a District 9 championship last summer.

A fan of Kingman

Growing up in Kingman, Bathauer developed a lot of connections, and he wouldn't hesitate to use them to get teams sponsors or help out in other ways. It was also Bathauer's connections and drive that helped Kingman Little League host district tournaments, which also helped bring in revenue to the city.

"He's always pushed because we always have the best fields, the best weather," Pitts said. "He just wanted to make baseball something for all the kids - not just our kids but all the kids around.

"He just thinks that Kingman was the best."

The people of Kingman have also shown Bathauer that he was the best, with various fundraisers including a golf tournament last month that went beyond the $15,000 expectation to raise just over $35,000 for his family.

"How did this small community raise $35,000 for a family?" John's wife Anne said a few days after the golf event. "John says, 'Anyone who bags on Kingman, I-40 is right there and you can get on it.' Because what the community has done this weekend and what they have done is just amazing."

Bathauer was first diagnosed with melanoma in 2009 but was treated and everything seemed fine until January, when an aggressive form appeared. Anne spoke of John's fighting spirit during a phone conversation with the Miner last month about the community support.

"He says he's going to thank them by beating this," said Anne in a phone interview with John listening in. "That's what he is doing. Every day he gets stronger and better."

While Bathauer will be remembered for all the lives he touched through Little League and the various other organizations that he was involved with, he will be best remembered as a loving husband to his wife Anne and father to his children, Josh, Jessica, Jenny, Alexis, Mike and Matt, and the countless activities that he would have his kids involved with. It's something that Pitts remembers having a conversation with John about.

"We would joke and laugh and I would be, 'Oh my goodness John, you have your kids involved in everything.' He was like, 'I have to keep those boys busy, I have to keep them slim. If there not busy, they will plump out.' That's just John, he was active with the boys."

Along with coaching his twin boys on last year's 10-11 All Star team, he also took the opportunity to take them to last summer's Major League Baseball All-Star Game in Phoenix, a special moment for both father and sons.

"This will be the best trip ever," Mike Bathauer told the Miner last July. "This is my first All-Star Game and his, too. He hasn't been to one in 46 years. I'm just hoping it's going to be a better time than anything else. I'm pretty sure I'm going to remember this for a long time."

As news broke of John's passing Friday the full magnitude of John's legacy was being felt beyond the city limits. Pitts has been getting calls and texts from coaches in Lake Havasu offering condolences.

"He has not only touched kids here in Kingman, but throughout, where ever he has gone. He's just left a mark wherever he was," Pitts said.

It's also a mark that will never be replaced.

"He's been so involved. Yeah, you get parents who bring their kids out to the park and stuff like that," Pitts said. "John just jumped in. It was like he was determined that he was going to be involved."