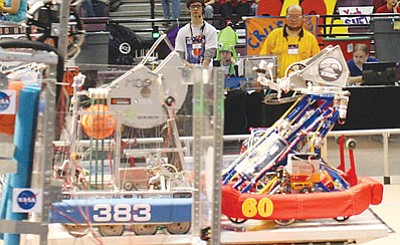 Courtesy<br /><br /><!-- 1upcrlf2 -->Team 60’s robot balances on the Coopertition Bridge, the center bridge, with Team 383 from Brazil at the end of a qualification match.

KINGMAN - Everyone's favorite robotics team kicked off competition season with a third-place finish at the Arizona Regional meet about a week-and-a-half ago.

Although third place was not what the team had hoped for, it was an impressive finish given what the Kingman FIRST Robotics Team 60 had to overcome.

In its very first match, Team 60's robot, Wrex, was struck by another robot, causing a motor to short out and briefly catch fire. Thinking quickly, assistant driver Noah Lucier was able to activate the emergency stop mechanism, which prevented any further damage. The motor controlled the rotation of the basketball shooter, rendering that part of the robot useless, which was a problem seeing how the majority of the competition was based on robots shooting basketballs at baskets.

After losing the first two matches, the team changed tactics from shooting baskets to playing defense. The team also concentrated on working for the bridge balancing points at the end of each match. As a result Team 60 ripped off five straight wins.

Wrex lost its last qualifying match, but balanced on the Coopertition Bridge with Team 383 from Brazil. Even though Team 60 lost the match, it earned two additional seeding points in the standings for the balancing feat.

The three qualifying matches the next day could not have turned out much worse for the team. Even though its alliance won its first match, Team 60 was disqualified for playing "too aggressive a defense." Wrex sat motionless on the court the final two matches, but the alliance partners managed to pull out one win, so Team 60 finished qualifying with a 6-4 record and was seeded 25th.

Team members worked feverishly to repair Wrex in time for the elimination rounds. Wire connections were checked and programming code was reinstalled. Some newer team members thought that Team 60 had little chance of being selected. But they were ecstatic when Team 2840, Blue Tide, from Phoenix Country Day High School, and Team 1726, N.E.R.D.S., from Buena High School, selected Team 60 to be part of their fifth-seeded alliance.

The problem with Wrex was eventually traced to the digital sidecar, an electronics part that communicates with each of the robot's various mechanisms. Once that was replaced and the robot began to respond, the roar from not only Team 60, but from other teams in the pit area, was deafening.

The Bionic Bulldogs went out with a vengeance and played tremendous defense against the top-seeded alliance of Team 610 from Canada, Team 842 from Carl Hayden High School, and Team 1212 from Seton Catholic High School, keeping them 25-30 points under their previous match total. It wasn't enough though, as Team 60's alliance was eliminated in the semifinals.

Team 60 will compete next in the Las Vegas Regional at the Cashman Center.

Qualifying matches begin on Friday with the elimination rounds scheduled to begin on Saturday afternoon. Admission to the event is free.

The Bionic Bulldogs are still looking to secure additional funding in preparation for the FIRST Championships in St. Louis at the end of April. The team is about $8,000 short of its goal to attend the Championships. Anyone willing to help the Kingman FIRST Robotics Team 60 with a tax credit, business sponsorship or in-kind contribution can contact Kingman Academy High School mentor Celeste Lucier at (928) 377-8586 or Kingman High School mentor Cliff Angle at (928) 530-0634.