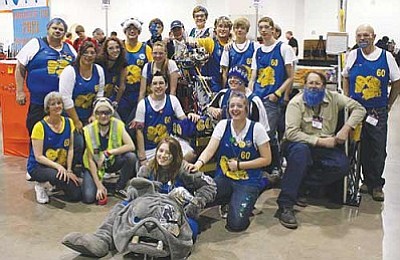 The Kingman For Inspiration and Recognition of Science and Technology Robotics Team 60 faced electrical problems all weekend with its basketball-shooting robot, Wrex. Whether problems came in the form of broken wires or the robot CPU getting grounded to the frame, things just didn't go Team 60's way.

The students, who hail from Kingman Academy as well as Kingman High, know they have a lot to learn between now and next year's competition.

Some of the other teams offered suggestions to Team 60, hoping to help them build a better robot next year. Some of the advice included adding safety loops in wiring, aeronautics connectors and an electrical board suspension system to lessen the effects of robot collisions in competition.

The award was created in 2010 to honor individual students who exemplify and increase awareness of the values of FIRST. They are students who have gained personal technical expertise and are expected to continue on as student alumni in the capacity of team mentors and leaders in their communities as advocates of FIRST.

Team 60 played a pivotal role in assisting another team win the highest Rookie Seed Award for the second-straight competition. In Phoenix, it was Scottsdale-based Team 4204, ROBOBEAR.

In Las Vegas, Team 4318, the Mo-Bots, arrived to the competition with one team member, one mentor and a robot in need of work. Without hesitation, Kingman's robotics team lent Team 4318 a hand. Borrowing a driver from a third team, the Las Vegas rookies ended up with a 6th-place finish.

Although the Bionic Bulldogs did not qualify for the championships in St. Louis this year, they're already looking toward next season. Team 60 would like to thank all of the volunteers, mentors, and sponsors who contributed to the team this season. The students plan to continue their community service and outreach efforts for the rest of the school year and into the summer. They will be at the Friends of the Library book sale in May and will once again be offering their Lego Camp to elementary and middle school students this summer.

The community-based team will have a head start on its fundraising goals for next year, but always welcomes support for the team, whether it be financial, technical, in-kind or mentoring. Anyone interested in supporting the team should contact Kingman Academy mentor Celeste Lucier at (928) 377-8586 or industry mentor George Williams at (928) 279-3824.