Kingman school hallways about to fill up
Schools, students prepare for first bell of school year 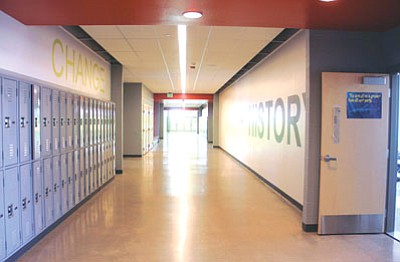 JC AMBERLYN/Miner<br> The newly painted halls of Lee Williams High School will echo with the sounds of students when the school year begins Thursday.

But it's probably how your kids feel with the end of summer and the start of a new school year looming.

In either case, the end of summer is near.

Lee Williams High School will open its remodeled doors for the first time to a freshman class of about 250 students.

The Cambridge Academy, a rigorous curriculum designed to prepare students for careers and college, will kick off its inaugural year in the district with programs at White Cliffs Middle School, Kingman Middle School and Lee Williams High.

Student-to-teacher ratios have increased, but not by as much as some members of the community fear.

"Class lists are causing concerns," Jacks said. "But we never know how many students we're going to have until the day school starts."

Someone looking two weeks ago at a class list for one of the elementary schools would've seen some classes with as many as 40 students. Jacks said no classroom will be left with 40 students.

Often, the actual class size is much smaller than the class lists compiled during the summer, Jacks said.

If it turns out that classes are fuller than expected, Jacks said the district will adjust them.

"We're not above hiring a new teacher at a school with a 40-student classroom," Jacks said.

Principal Steve Hite, who is entering his first full year with the school, said enrollment is up to 32 students.

Each day, students will take one of three extracurricular-type classes - physical education, music and computers/art. The three classrooms will rotate between these courses on a daily basis, Hite said.

Hackberry's governing board meets at 4:30 p.m. the first Tuesday of every month, and its agendas are posted on the district website, www.mycedarhills.info.

"It's been crazy lately, but I'm really excited about the new school year," Hite said.

Kingman Academy of Learning students get a few extra days compared to their counterparts, but once school starts, it's time to get down to business.

"All administration staff is back and in their place," said KAOL District Administrator Susan Chan. "There are a few new teachers scattered throughout, though."

Though KAOL teachers keep an open line of communication with the parents of district students, the first of a few parent/teacher conferences happens Sept. 13, and there will be no school that day.

Other than continuing to establish common core standards - international standards designed to broaden students' scope of knowledge - and implementing new ways to teach math to high-school students, Chan said nothing has really changed since last year.

The district continues to focus on bringing parents, teachers and students together in order to help push students toward successful futures, Chan said.

Other than the middle school, which starts at 7:45 a.m., all KAOL schools begin promptly at 8 a.m.

"We're going to continue doing what we do best," Chan said. "And that's educating kids to the best of our ability."

School right around the corner in Kingman
KUSD back in session today
Smooth sailing on opening day
How is your school doing? School grades released
Q: Do you know how old Kingman Academy is?