Chan: Kingman Academy can do better
Academy garners a 'B' on AIMS tests 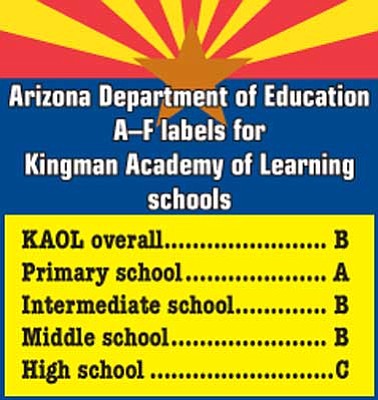 KINGMAN - Despite solid test results and high marks from the state, Kingman Academy of Learning has room for improvement, especially when it comes to high school math, said District Administrator Susan Chan.

The Arizona Department of Education doled out a "B" to KAOL for its schools' performance on the 2012 Arizona Instrument for Measuring Standards.

The academy's high school received the lowest grade - a "C" - of the district's four schools, missing a "B" by a mere two points. Though the school just missed a better grade, Chan took it at face value.

The score reflects the problems associated with teaching high school math, which has been a worrisome subject for many years, Chan said.

To deal with the issue, KAOL is changing the high school math program for the upcoming school year.

Students at the high school are on block schedules. They take a set of four classes in the fall and another set of four in the spring. With this type of schedule, some students were able to take one math class in the fall of their freshman year and then avoid math altogether until the spring of their sophomore year, Chan said. That equates to a year off from a subject that requires consistent attention.

That loophole is now closed. Freshmen and sophomores now get the pleasure of taking math each semester in their first two years in high school, Chan said.

"We want our students exposed to more math," she said.

The next change to the program focuses on delivery. The high school now offers a computerized math curriculum supplemented with a certified math teacher, Chan said. Math instruction for freshman and sophomore students as well as some juniors will now take place in math labs, but the computerized work they do will be backed by group work with the teacher, she added.

Chan was unwilling to go further into the program's changes.

"There is a plan," Chan said. "We'll see next year how well it worked."

The academy's intermediate school (third through fifth) and its middle school (sixth through eighth) both earned "B's."

Even its primary school earned an "A" based on second-graders taking the SAT-10, a test that measures whether or not students are on track to pass the AIMS test in third grade.

"The results showed that all our second-graders are on target," Susan Chan said.

Every single second-grader who took the SAT-10 passed it.

Looking at the intermediate and middle schools results, it's hard to fathom them not receiving "A's."

One must look to the improvement (labeled as "growth by Department of Education) scores to understand why the schools didn't receive higher marks.

The intermediate school ranked in the 49th percentile for overall improvement. This means 51 percent of Arizona elementary schools that took the test showed more improvement from 2011 than KAOL intermediate.

The middle school ranked in the 46th percentile for overall improvement.

With students performing at a relatively high level, it's difficult to squeeze more improvement out of them from year to year.

Consider the results from the third-grade math test. Of all the third-graders who took this portion of the test, 78 percent passed, but when it comes to improvement, the grade ranked in the 32nd percentile.

"It's an issue of improving on what's already being done well," Chan said. "It's a nice predicament to have."

The academy continues to analyze curriculum in order to pinpoint what's missing, and it's finding that just meeting the standard (passing the AIMS) doesn't necessarily mean students are doing well. For instance, meeting the reading standard in the 10th grade simply means students can read at the level of a fifth-grader, Chan said.

"It's not OK to just meet the standard," Chan said. "We need to push kids to exceed the standard because it gives them a better chance to succeed after high school."

This is where common core standards - rigorous international standards that more and more Arizona schools are turning to in order to get away from AIMS - come into play.

The academy, which has been working with the common core since last year, uses the standards to widen its students' knowledge base. Subjects do not stand alone with common core. It's a much more integrated approach, Chan said. This allows students to get a better understanding of how subjects - from math to reading - all work together.

"It makes education more relevant to the child," Chan said.

There is such a thing as pushing kids too far, she said, and that's not something the academy wants to do. The goal is to provide balance while also pushing students to do better, she said.

When it comes to standardized testing results, Chan said, "I always want better because it means the kids did better."