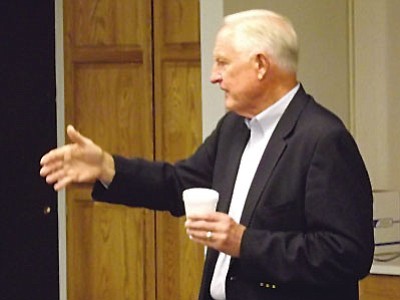 The major goal of Arizona Ready is to implement common core standards in order to ready students for careers and college, but local educators seem to be taking a show-me-something approach.

Audience members criticized what they saw as a de-emphasis on career and technical education at the elementary and middle school levels, since having that option available reduces dropout rates.

And, of course, there were concerns that education funding won't be adequate to implement any changes anyway.

Barrett stressed the need to smoothly implement common core standards throughout the state in the next couple of years.

"We need the international competitive curriculum," Barrett said. "Getting it introduced effectively is the only way to say the council did something."

Common core standards are rigorous, internationally developed standards that allow students to delve beneath the surface when it comes to learning and use their academics to propel them toward a stronger future. The use of the standards will allow Arizona to move away from the Arizona Instrument for Measuring Standards.

Schools across the state, including those within the Kingman Unified School District and Kingman Academy of Learning, have already started to move toward common core standards in preparation of the change.

To fix education in Arizona, Barrett said, an emphasis must be placed on hiring and training great teachers and giving them livable wages, raising student expectations and providing some sort of competition within the education system that rewards districts, teachers and students performing at high levels.

Jack Pozenel, the chairman of the Western Arizona Vocation Education governing board, said he wasn't hearing anything about the students. He wondered how the state planned to involve students receiving career and technical education and help them absorb the new curriculum.

Students find a lot of success in multiple educational areas once they enter CTE programs, he added.

Barrett said the council looks at the success of CTE programs when it dives into the problems associated with the state's dropout rate. The council looks at the rates and tries to find districts and programs that work toward involving students and keeping them in school, something CTE programs have done a good job at, Barrett said. It's possible that common core can be folded in with CTE because the two are not mutually exclusive.

But in 2011 the state decided to cut freshman funding for joint technical education districts. This fact doesn't sit right with KUSD board member Bill Goodale, who said, "We're looking at society's needs instead of the kids' needs. What's wrong with more technical education?"

He said there aren't enough opportunities for elementary and middle school students to pursue career and technical education. He spoke of the in-school detention building at Kingman Middle School and how it used to be used for woodshop. He sees the change as a crime.

Everyone there seemed to agree that involving students' minds is the key to improving education, but local educators argued it needs to be focused on at the elementary school and middle school levels as well as in high school.

Then there are Arizona's funding issues, which could throw a wrench in all of Arizona Ready's plans.

"It's ridiculous," Barrett said, speaking of the complexity of Arizona's education funding statute.

He wants to see it driven toward funding-by-performance, and then after the ship's been righted move it toward a more equitable plan. There is disparity between districts when it comes to state funding that sometimes reaches a factor of five, Barrett said.

"We're looking at (funding) in detail," Barrett said. But he wasn't able to give any specifics that would lead to the mechanism being changed.

Arizona Ready came from the need for the state to come up with a solid plan to push students toward career and college readiness with the use of internationally developed common core standards; databases to track student, teacher and school progress; an emphasis on training better teachers; and more support for struggling schools.

Essentially, it's a reform plan for the future of the state's education system. It set goals for the state to achieve in the next decade, such as increasing the percentage of third-graders meeting state reading standards to 94 percent in 2020, raising the high school graduation rate to 93 percent, increasing the percentage of eighth-graders achieving at or above on the National Assessment of Education Programs to 85 percent in 2020 and double the amount of students receiving bachelor's degrees to 36,000 a year.

With percentages hovering in the low 70s on third-grade reading and high school graduation rates and in the high 60s for eighth-grade achievement, the council as well as the rest of the state has a steep hill to climb.