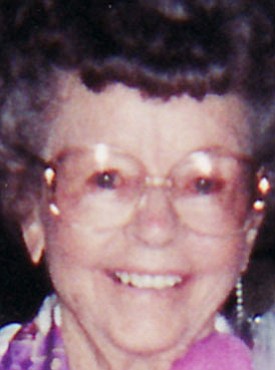 Elsa Ruth Carrell Fletcher passed away early Saturday morning, Aug. 25, 2012, at her daughter's residence in Kingman. Ruth, a 38-year resident of Kingman, was born June 8, 1911, in Holdenville, Okla., to parents James H. and Lavona J. Meshew Carrell. Ruth married E. Leonard Fletcher at the age of 16 in Walters, Okla. During their 53-year marriage, they raised six children. Her spouse left this life Oct. 15, 1981.

Ruth continued to maintain a home in Kingman. Always an avid reader, she also enjoyed cooking, sewing, needlecraft and interior decorating. Her focus was always home and family. She loved to sew and created many gifts for her children.

Raised in an agrarian lifestyle on a farm in Oklahoma, Ruth acquired a solid work ethic and a love of the natural world at an early age. In many ways she was the essence of her beginnings. Ruth remained independent and self-sufficient until her eyesight failed at age 99. She remained in the nursing care of her daughter, Majorie Fletcher, until her death. Ruth celebrated her 101st birthday in her home on June 8, 2012.

Ruth will be remembered and cherished for her daily ledger of work, her shared creative talent, thrift and for her loving heart - her truest wisdom.

Ruth's friends and family will miss her and are so thankful for the time shared with her.

A memorial service with family and friends will be held at a later date in Bishop, Calif.