4 vie for 2 slots on Kingman school board 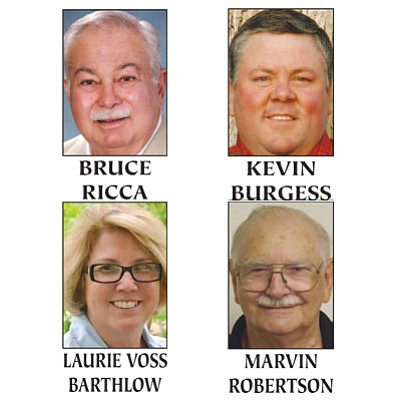 KINGMAN - You have a lot of important choices to make during the general election in a little over two months, but don't let the smorgasbord of candidates and races dissuade you from picking two people to sit on the Kingman Unified School Board for the next four years.

Pat Carlin, who's not running for the first time in over a decade, and Laurie Voss Barthlow's seats are on the ballot. Four candidates have stepped forward to fill them, including incumbent Voss Barthlow. She seeks her first full term, but retired educator Marvin Robertson, business owner Kevin Burgess and retired business owner Bruce Ricca stand want those seats, too.

"We must realize how strong the community can be if we're unified," Burgess said. "Divided, we'll get beat."

Burgess believes it's going to take the community as well as the teachers and the school district to help lift local students up to a point where they want to excel.

Burgess isn't speaking of the individual grades students earn on tests and in classes. He's referring to the Arizona Department of Education's A-F labels, which were released earlier this month. Kingman Unified earned a C this year, but last year it earned a B.

Though he sees the value of the district grade, Burgess is more focused on looking at the grades each school received and holding them accountable for their performance.

"We need to make sure our kids are getting the best education they possibly can," Burgess said.

Two of Burgess' children graduated from Kingman High, and four of his kids are currently in enrolled in the district. Other than what he's learned through his children, Burgess' experience in education is rather limited. But his experience in the business world isn't.

"I've been in business for myself for the last 25 years," he said.

He wants to bring his budgeting experience, his willingness to compensate valuable employees for their work and his ability to manage people to the school board. He wants to look at the problems (per-student spending, teacher salaries, etc.), see "exactly where we're at" and help devise a plan to fix the issues.

If you would like to speak to Burgess about his candidacy or the school district, shoot him an email at kevin.krk@gmail.com.

Since 1989, Voss Barthlow has managed the local Chicago Title. Similar to Burgess, her experience in education is limited, but her business experience is robust.

"At Chicago Title, I am directly responsible for the budget preparation, financial projections and the bottom-line profit of our business in Mohave and La Paz Counties," Voss Barthlow said. "I am held tightly accountable for the performance and efficiency of my operation, so I believe I have brought some solid business experience to the KUSD board."

Voss Barthlow joined the board in 2010 to fill a vacancy. She hopes to build on her time and looks forward to seeing the results of several programs put into the school district by the board, such as the rigorous yet relevant Cambridge Academy.

Being on the board has been a unique experience for Voss Barthlow.

"This is my first foray into the public sector, and I confess it's been an eye-opener," she said. "I've learned something about how the public school system is funded, for one thing. It's been interesting to see the different sources ... from the national to the state level."

Even while learning on the fly, Voss Barthlow didn't give in when it came to her ideals.

"As with my business at Chicago Title, the (district) must be able to operate on the revenues generated," she said.

Voss Barthlow was one of two board members to vote against the opening of Lee Williams High. At the time, she said: "It's a beautiful school, but we can't afford to open it."

"I'm very much invested in the success and challenges of (the district)," Voss Barthlow said. "I've learned a lot, and I think I can help. I hope the voters will give me that chance."

Send Voss Barthlow an email at laurie.barthlow@gmail.com if you'd like to chat with her about the district, education and the election.

A group of people involved with the school district approached Ricca - knowing he's retired - and asked him if he would run for a position on the board. He took them up on their offer, and now he's in the race.

As with Voss Barthlow and Burgess, his doesn't have much experience in education. But in the past, he ran a fast food restaurant called Pioneer Take Out, which sat where Alfonso's is now. He also ran the snack bar and restaurant at the bowling alley. At both establishments, he employed the youth of Kingman and learned about the schools through their eyes.

"Education is one of the biggest parts of out lives," he said. "We never quit learning."

The school district has been good to his and his wife Barbara's children, and he doesn't necessarily have a problem with how KUSD operates.

He knows he has a lot to learn and plans to focus on board governance for now.

To start, he plans to attend every school board meeting between now and the elections.

The public sector is nothing new to Ricca. He's served on several boards and commissions throughout the years, including the Parks and Recreation Commission and the Softball Association.

"But this is something different for me," he said.

"I want (KUSD) to be good enough that people from around the country want to come here for their children's education," Robertson said. "There needs to be a sense of urgency to make this school year the best it can be because (the students) can never get this year back."

The longtime educator spent his childhood picking strawberries and hops with his family as they bounced around the country looking for work. That led to him earning agriculture and agriculture education degrees from Oregon State University, two graduate degrees from OSU and Michigan State in education-related fields and working for a plethora of education programs throughout the nation.

He even started an agriculture program in the 1950s and 1960s at Sherman County High School in Oregon. The program is still in operation today, he said.

Education has always come down to the students, the parents and the teachers.

But there's a problem when "teachers don't have enough time to teach," he said.

Standardized tests are the main culprit, he said. They take away from the urgency of education and hamper students' ability to achieve.

"I would like to see a revolution in schools," Robertson said.

He wants more emphasis placed on vocational education because it's been shown that if you get students interested in what they're learning, they'll perform better in other subjects. Just look at the district's music program and the robotics team, he said - those are good programs that foster strong academics outside of themselves.

Despite his experience in education as a high school teacher and national researcher, Robertson knows he has a lot to learn about KUSD.

If elected, he plans to visit every school in the district. He would like to visit some beforehand, but he also doesn't want people to think he's campaigning at the schools. He promises to be visible and available within the district and community.

"We've got to do a lot with what we have," Robertson said. "But we can improve education in Kingman, classroom by classroom."

All four candidates are slated to speak at the 5:30 p.m. Sept. 12 Mohave Republican Forum and at the 11:30 a.m. Sept. 17 meeting of the Kingman Republican Men's Club. Both events take place at the Elks Lodge, 900 Gates Ave.