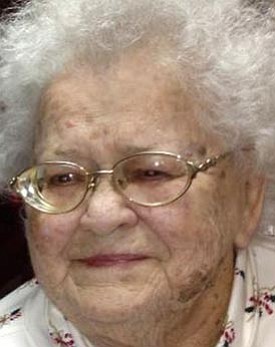 Peggy was born April 22, 1926, in Iuka, Kan., to Marguerite L. Moore and Ralph E. Shinkle. She raised her children in Wichita, Kan., briefly lived in Chloride, Ariz., and lived with her late husband Henry in Grand Prairie, Texas.

After her husband's death, Peggy returned to Wichita, where she spent 22 wonderful years with family living nearby. The last five years she enjoyed precious time with her family in Kingman.

Peggy is survived by her brothers, Jack Shinkle and Ralph Shinkle; her sisters, Jude L. Young, Nerma Seeney, Roberta Adamson and Betty Miller; her daughter, Suzanne Esquerra; and a son, Darrel Kirk. She was the proud grandmother of numerous grandchildren, great-grandchildren and great-great-grandchildren.

Peggy will be greatly missed by so many family members and friends.

A memorial service will be held at noon on Sunday, Dec. 16, at Roger and Suzanne Esquerra's home, 1969 Hope Ave., Kingman.