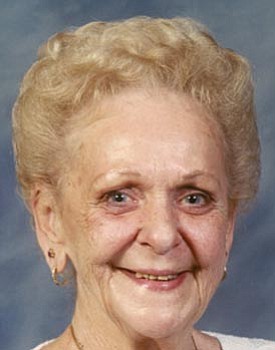 Betty Jane Shilling passed away Thursday, Dec. 13, 2012, with her family by her side at Joan & Diana Hospice Home in Kingman. She was 81.

Betty was born on Feb. 12, 1931, in Chicago to Elizabeth and Edward Kowalski. She remained in Chicago until she enlisted in the U.S. Navy in 1951 and was stationed at the U.S. Naval Hospital, Corpus Christi, Texas.

There she met her husband Phil in February 1953, when they fell in love and decided to marry. Phil arranged for approved leave while Betty was officially AWOL when they flew back to Chicago to be married on June 20, 1953. When they were both honorably discharged from the Navy in 1954 they began their life together in Worth, Ill., and started a family.

In 1968, while on vacation out west, they stopped in Kingman and decided to stay. Phil became employed with Citizens Utilities Phone Co. and Betty stayed at home to raise three young boys.

As the boys reached school age, Betty realized her mentally challenged son wasn't receiving the education he should. It was then, in 1970, that Phil and Betty along with some local politicians, business people and physicians, developed and opened the Little Red School House and the Mohave County Retarded Children's Association. When her son could receive qualified instruction through public school, Betty started a career at the Mohave County Assessor's Office and then with Western Electronics and Communications.

After their eldest son was injured in a diving accident in 1983, Betty was the driving force behind a local effort to open Footprints, a fitness center for spinal injury victims. Betty was also instrumental in helping to organize the Kingman Dolphins Swim Team when she and other local families wanted some fun and friendly competition for their children.

Betty never backed down from a challenge. She faced many obstacles throughout her life and never failed to reach her goals, which usually involved her family.

Betty was most proud of her family and was fiercely devoted to her husband and three boys.

Services will be held at Sutton Memorial Funeral home at 4 p.m. Tuesday, Dec. 18. In lieu of flowers, the family requests for donations to be made to KRMC Hospice.