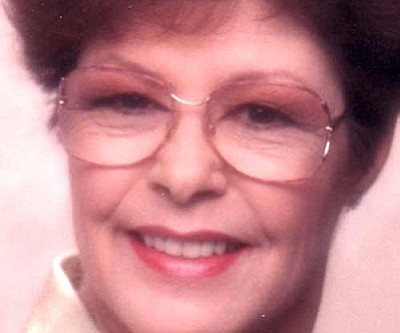 She is survived by her husband of 50 years, Bill; sons, Wayne (wife Christy) of Poway, Calif., and Preston (wife Renee) of Phoenix; daughter, Keneen (husband JD) of Chino Valley; sister, Pattie Ryden of Kingman; brother, Dennis May of Phoenix; brother and sister-in-law Gary and Janet Watson of Kingman; sister-in-law, Nancy Fancher of Kingman; as well as eight grandchildren, four great-grandchildren, and many nieces and nephews. She was preceded in death by both parents, and two sisters, Jodie Garman and Kenenne Dawn May.

Donna attended school and graduated from Mohave County Union High School in 1960. She served as a Page at the state capital in 1960 to 1961 for Mohave County Senator Thelma Bollinger. Donna worked at KRMC for 17 years, retiring in 2004.

She enjoyed camping, reading, cooking and gardening, receiving numerous awards for her African Violets and roses in past County Fair exhibits. Her favorite place to vacation was Seapointe Resort in Carlsbad, Calif., but she also enjoyed time spent in the Hualapai Mountains and camping sites in northern Arizona.

A celebration of life is to be scheduled at a later date.