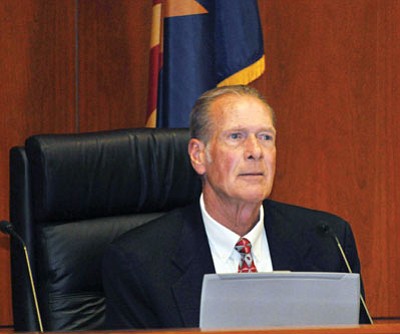 KINGMAN - An audit on available space within county buildings for the Mohave County Library Annex was continued until March during Monday's Board meeting.

The Board asked staff to look at available office space in January after several questions were raised about renewing the lease for the office space the Annex currently uses, and the possible conflict of interest of renting the space from the relatives of two county employees. The renewal of the lease was approved in January.

Watson said he added the item to Monday's agenda because he hadn't heard anything from staff about progress on the audit.

County Manager Ron Walker said staff was in the process of putting the audit together and he didn't realize there was a timeline on it.

Supervisor Tom Sockwell asked if staff would have the audit ready by the March Board meeting.

Walker said that would be possible.

Board Chairman Buster Johnson asked if the county could get sued for breaking the lease.

Deputy County Civil Attorney Bob Taylor said an audit of the available space in the county's buildings would not affect the lease.

He would have to take a closer look at the lease to see what effect breaking it would have on the county.

County resident Steven Robinson pointed out that when Taylor gave his legal opinion on the renewal of the lease in January, he left out the part that county employees that might have conflict of interest in the matter needed to report that to the county, even if they are not involved in the decision making process.

Robinson also pointed out that Yvonne Orr is in charge of the county's Library taxing District. Orr's husband is one of the owners of the office space that the county leases for the Library Annex.

The Board voted unanimously to continue the issue to its March meeting in order to give staff more time to finish the audit.

The Board also unanimously approved the consent agenda, which included a request from staff to cancel the contract to tear down the Arnold Plaza Building on Oak Street and restart the bidding process on the project.

The Board originally awarded the $635,000 contract for the demolition to Lewis Equipment Services in November. Another bidder, H&H Development, protested, and when county staff investigated, they were advised by the Arizona Registrar of Contractors office that Lewis was not licensed to demolish the building.

According to staff, the next lowest bidder also did not meet requirements, and they recommended the Board go with the third lowest bidder, NCM Demolition & Remediation from California. The Board was supposed to make a decision on the matter during its January meeting, but the item was abruptly pulled from the agenda.

According to information provided to the supervisors for Monday's Board meeting, the County Attorney's Office received a letter from an attorney for Lewis Equipment Services. It warned that if the Board awarded the bid to another company it would be violating the law and Lewis would have the right to sue.

The same day, Jan. 10, the County Procurement Office received an email from Lawrence Matthews, the interim chief of Licensing at Registrar of Contractors. Matthews confirmed that Lewis had the wrecking license.

It is unknown when the County Procurement Department will put the project back out for bid.

The Board also continued a request from Sterling Solar to amend their zoning plans for a 1,200-megawatt solar plant near Golden Shores. The company wants to replace the solar technology they use for the plant from Stirling SunCatchers to photovoltaic panels, because the company that makes the SunCatchers is no longer making them.

The Board continued the item after three Golden Shores residents raised concerns about the proximity of the plant to the community and using Polaris Road for the main entrance to the facility. A local school is about a mile away from Polaris Road and there were concerns about traffic and the students.

The Board asked that Sterling Solar hold one more public meeting in the Golden Shores community about the plant and continued the item to its March meeting.

• Approved a request from staff to renegotiate the management agreement for the Kathryn Heidenreich Center.

• Approved a request from Johnson to audit the consolidated courts to determine if the county was saving money.

• Approved a request from Johnson to direct staff to look into the progress of removing the Black Mesa pipeline. The pipeline used to transport coal slurry to the Mohave Generating Station in Laughlin. The power station was closed in 2006, and the company operating the pipeline recently asked the county to terminate its contract for the pipeline right of way. The county has required the company to completely remove the line.