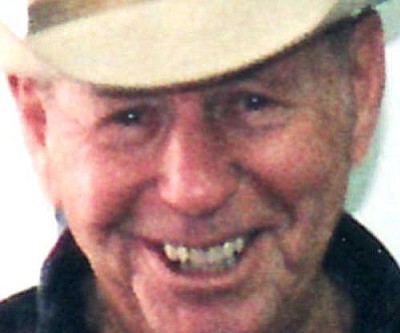 His father, Henry, was on his way to California in early 1930 when he stopped to visit a family friend. Mr. Miller convinced him to stay and on July 4, 1930, his wife, Leah, and five children arrived in Kingman by train. They all settled in and Henry was working as a salesman at the Old Trails Garage on Beale Street. Another child had been born and the family home had been built on Copper Street.

Sonny met the love of his life, Helyn Jo Alexander, in high school and they were married in June of 1940. He graduated high school (Mohave County Union High School) where he played on the football team and basketball also in 1941. In 1942, he joined the Navy and during World War II spent time serving on the island of Guam.

After being discharged in 1946, he worked at the old King's Dairy driving trucks between Kingman and Las Vegas. He worked at Biddulph-Dunton Motors as a mechanic and then he went to work for W.E. Hull driving a Mobil Gas truck. There were a lot of ranching families in the Wikieup area that depended on him for gas and in turn he would depend on them when he would get caught on the wrong side of Trout and Burro Creeks during flooding and couldn't get back across for several days. He went to work for Ford Proving Grounds in Yucca in 1955 as a security guard, then to test driver, and retired in 1983 as crib supervisor.

He loved horseback riding with his brother Dale and good friend Charlie Cook. He loved camping and for many years the family would congregate at Dog Town Lake outside of Williams for a week or two. He also loved boating. Weekends were spent with kids, dogs and boats at Lake Mohave.

Sonny was preceded in death by his parents, Henry and Leah May; sister, Josephine Nevins; brothers, Kenneth and Dale May; daughters, Kennene May and Cherie Jo Garman.

The memorial service will be at a later date.