Board puts the brakes on Arnold Plaza demolition in Kingman
Board voids Lewis Equipment's contract for demo, staff to award new contract 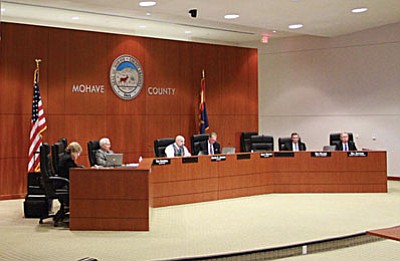 JC AMBERLYN/Miner<br><br> The Board of Supervisors listens to suggestions from the public about what to do with the Arnold Plaza Building Tuesday. The Board has authorized staff to award a contract to tear the building down.

The demolition of the Arnold Plaza building on Oak Street continues to cause issues for the county.

The Board of Supervisors continued an item on Tuesday's agenda that would have canceled one contract to demolish the building and award it to another company because the supervisors wanted more time to look over the details.

The Board approved a $491,476 contract with Lewis Equipment in November for the demolition. A key component of the contract is the removal of asbestos from the building.

According to information provided to the Board, a bid protest was filed with the Procurement Department shortly after the Board approved the contract. During the investigation the department contacted the Arizona Registrar of Contractors to re-confirm that Lewis Equipment's license would qualify to do the demolition work. A second check of the information showed that Lewis' license did not meet the qualifications and the bid had to be awarded to the next best bidder.

The next lowest bidder did not qualify because, according to the staff's report, they did not have enough experience and had bonding issues in the past. The county requires contractors on the project to carry a bond in the full amount of the project.

Board Chairman Buster Johnson said during the meeting that the license issue was caused by a change in state law and had nothing to do with Lewis Equipment.

Johnson did allow people who had signed up to speak on the item to come forward and give their opinion on the project.

"I was hoping you would consider another avenue (rather than tear the building down)," said Denise Bensusan, who is running for the District I Supervisor seat. She recommended selling the building, and letting someone else fix it, and use it for commercial purposes downtown.

If the Board was determined to tear the building down, Bensusan recommended using the lot for public parking.

According to the County Assessor's website, the full cash value of the two parcels that make up the property, with the building on it, is more than $1 million.