Wife arrested, but husband who escaped in Kingman still on the loose 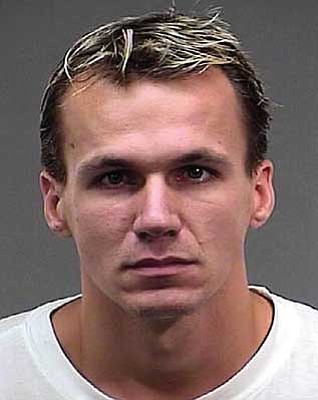 KINGMAN - Authorities continued their search Thursday for a Mohave County Jail inmate who escaped from the transport van as he was being taken to court.

Darren Morrison, 26, escaped from custody Wednesday. The Mohave County Sheriff's Office, which oversees the jail and is handling the investigation in the escape, said Morrison's hands and feet were in shackles while he was being transported.

During the ride to the courthouse, Morrison was somehow able to get out of the restraints. He was one of two inmates being brought over, said Sheriff's Spokeswoman Trish Carter.

She said the other inmate exited the van first. Morrison followed, acting as though he was still in restraints, but he ran off and the shackles fell away once he got out of the van and onto the pavement.

A guard accompanying the van chased Morrison for about a block before he got away, Carter said.

She added that investigators are looking into how Morrison was able to free himself. She said no evidence was found inside the van of a possible tool he could have used.

Multiple agencies responded to the downtown area and conducted a ground and aerial search for the next several hours without success.

Morrison's wife, 24-year-old Ashley Anne Morrison, was arrested hours after her husband's escape after detectives went back and reviewed jail phone conversations between the two. Authorities allege she helped Morrison by providing clothing, survival gear and possibly a gun. She is charged with first-degree conspiracy to commit escape.

Morrison was scheduled to appear in court Wednesday morning for a routine hearing for his aggravated assault case in which his wife was the reported victim. Lake Havasu Police said Morrison was arrested last July after an argument between him and his wife over his cigarette smoking. Morrison reportedly threw his wife onto a bed and began choking her to the point of her almost passing out.

Morrison left the home before police arrived but returned a short time later while they were still there. When informed that he was being arrested, Morrison reportedly told police, "No I'm not," and then ran away. He was caught a short time later.

Morrison also sparked a search in the Lake Mead Recreation Area in October after he ran from a park ranger who attempted to pull him over. He was arrested weeks later in Florida and brought back to Mohave County.