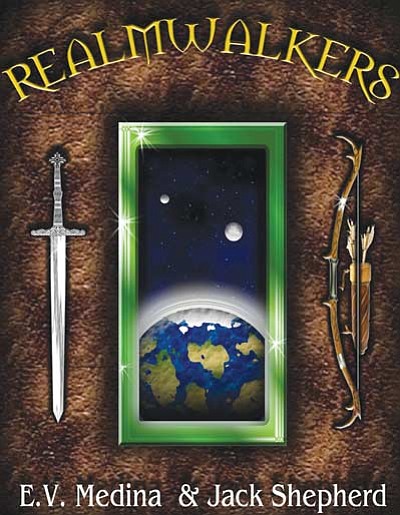 Without ever meeting in person, Elva V. Medina and John Wheeler joined forces over the Internet to write "Realmwalkers," a fantasy/science fiction novel.

Medina, of Lake Havasu City, lost her job as a marketing representative for Capital Title Agency about three years ago and was forced to decide: What's next?

A lover of the arts, Medina turned to writing short stories based on the fictional world of the role-playing game "Everquest" and publishing them on websites such as Associated Content.com and Triond.com. It was through those websites that she met Wheeler, who enjoyed role-playing as well.

Medina had attempted to write a book when she lived in Florida during the early 2000s, but unforeseen circumstances struck, forcing her to shelve her inner novelist.

Fast forward to the late 2000s when Medina lost her job and was struggling to find new work.

Her husband Lee York told her, "This could be God's way of saying 'write your novel now,'" she said.

Medina discussed collaborating on a novel with Wheeler, also a writer. He agreed, and they moved forward on the project.

They created characters together, and she created a world - Tiaera - complete with countries, oceans and cities. They began writing chapters, and emailing them back-and-forth to each other for feedback, editing and critiquing purposes. From there, they built the story.

When storyline problems arose, the two would either talk it out on the phone or instant message each other over the Internet. This process continued until the two completed the book.

Medina also used her expertise in graphics to design the covers, create maps of the world and illustrate some of the story's characters - all of which can be found within the tome.

Once the design was done, editing was complete and the two were happy enough with the story, Medina used the self-publishing company CreateSpace to publish the book.

Medina has since done all the marketing for the book, as the publishing companies she approached wanted to change parts of the story and nix the artwork.

"I must develop my own following," Medina said. "It's been slow and painful doing so, but I'm still getting out there, and at night I can sleep because I owe nobody anything."

Wheeler, who went by the pen name Jack Shepherd for the purposes of the book, contributed his writing to the project, but left the marketing of the book in Medina's hands. So, for the most part Medina gets all the money from book sales unless Wheeler makes a sale on his own.

"He just doesn't have the time for marketing," she said.

Since the book was published, over 100 copies have been sold. It's available through her blog, Tiaera.blogspot.com, and on Amazon.com. Copies can also be found at the local Hastings, 3153 N. Stockton Hill Road.

"It was a fascinating experience writing this book with Medina," Wheeler said. "I haven't done something like this before - at least not to this extent."

There were times when the two "fought like a married couple," Wheeler said. But most of the time, the process focused on a lot of give and take. Different stages presented different problems, he said.

If Wheeler could change anything about the book, he would allow more conflict between the protagonist, a parallel-universe jumping hero named Alain Harper created by Wheeler, and Tiaera's goddess Astria, who was created by Medina.

"A higher level of conflict would've been fun to play with," Wheeler said. "Things that are allowed by (Astria) are not allowed in Alain's world."

All and all, Wheeler is pleased with the way the book turned out and would not rule out doing something similar in the future. He just doesn't know how much time he could devote.

Medina, on the other hand, definitely plans on writing another book, but she said it would most likely be a solo enterprise.

"I would like to see how far I can go," she said. "I'm like a miner digging, trying to strike it rich with a following, so that I can start a new book. If it fizzles, I'll call it a good run and move on."

It was great having two writers working on the story, Medina said. Each writer paced the other, but now that the work is done Medina believes she can do it on her own.

Medina, a member of the Lake Havasu City Writers Group, said the group and her family were supportive and offered encouragement and feedback at every stage.

"A writer needs the support of family and friends," Medina said.

If interested: Medina will be at Hastings from 11 a.m. to 3 p.m. Saturday signing copies of "Realmwalkers." More of her work relating to the world of Tiaera can be found on Medina's blog archives, Tiaera.blogspot.com. Also, visit "Realmwalkers" Facebook page for more information.