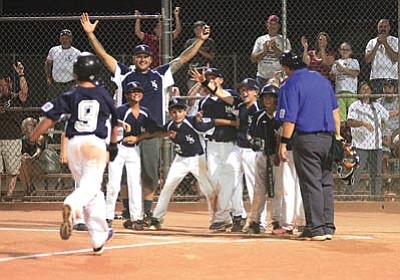 RODNEY HAAS/Miner<br> A mob of teammates awaits Kingman South’s Rilee Araya after he hit a two-run home run in the top of the seventh inning in the District 9 Championship game on June 30. South beat Kingman North 6-3 to advance to the 10-11 state tournament that begins today at Southside Park.

It's the little things that can make or break a huge event. A smile, a thank you, or a small discount at a local business to say, "Welcome to Kingman, we're glad you're here."

"If we treat these guys right and our district sees that we treat them right, more that likely they will favor us and give us another tournament," Pitts said.

For her part, Pitts has been asking the community for help, from volunteers to help with the day-to-day operations of the tournament, to local business for donations for player goodie bags, to asking businesses to give discounts to players who may come in with their parents.

"It's a great thing for the community," said Kingman South manager Jason Gary, whose team will represent District 9 at the tournament beginning at 7:30 p.m. today. "It helps a lot of people out and as long as we do it the right way, they will be willing to come back."

The last time Kingman hosted a state Little League tournament was in 2007, when the Majors were in town.

But as Pitts points out, the state tournaments travel among each district and with District 9 having two leagues each in Kingman, Lake Havasu City and Yuma, in addition to leagues in Bullhead City, Blythe, Parker and Needles. The competition to host a state tournament among the districts isn't only tight, but it's also very competitive within each district.

"I don't know when we will be up for it again," Pitts said. "If we take care of people and show them that we can run a tournament, then we will be more apt to get another tournament."

However, there are two things that Kingman has that a lot of cities in Arizona don't have, and that's facilities and (relatively) cool weather.

With the tournament expected to draw teams from as far as way as Cochise and Santa Cruz counties, along with the coaches, parents and others, the local hospitality industry is expected to benefit over the next week. But despite Pitts' best efforts in trying to get all the teams to stay locally, some have chosen to stay over in Laughlin as the leagues and districts search for the best deal.

"You can't blame them," Pitts said. "It is kind of hard for us to compete with Laughlin - they have so many rooms there and they have more money coming in so they can have lower rates."

Pitts added that while some districts will help cover the costs for a team to travel to the state tournament, other times, it's the individual leagues that bear the brunt of the costs. This can be an added expenditure to what can be an already pricey all star season. It's something that Pitts has had to deal with this year when North had to send three teams out of town for tournaments.

Because of this, it left North's bank account pretty low for the expenses to host the state tournament, as the league does not receive any funds from District 9 for the event. But thanks to the Kingman Powerhouse Visitors Center, who gave Kingman North a $5,000 grant, they are fully stocked and ready to go.

"It's been a huge, huge help," Pitts said. "We get no money from the district to run this, we are getting nothing from Little League to host the tournament. It's all us, so every little bit helps."

Pitts said the grant money will be used for the field rentals, which includes field upkeep during the tournament by the city. The money will also be used to help stock up the concession stand as well as travel re-imbursement for umpires, including lodging and mileage.

"It helps offset the costs with the general expenses of running this tournament," Pitts said.

As Pitts and her army of volunteers get ready to start the tournament that will continue until early next week, she is quick to point out that Kingman has a dog in this race. Kingman South is competing and it would be great to get community support.

"It would be nice to see some people that may not be involved in Little League come out and enjoy the tournament," Pitts said. "If you love baseball, it is the pure form of it. Those kids are excited and that is what they live for. It's pretty exciting."

And for the community, small gestures of appreciation can leave a lasting impression on visitors over the next week.

"We just want to put on a tournament where they are happy and we've gone out of our way to show them that, even though we are a tiny town in the northwest corner of Arizona, we know how to treat people right," Pitts said.