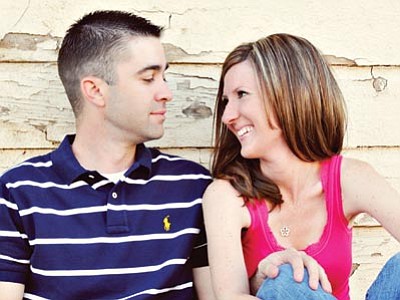 Mr. and Mrs. James and Connie Stephens of Kingman announce the marriage of their daughter, Megan Leigh Stephens, to Eric Day Stevens, son of Wendell and Cathy Stevens of Payson. The couple was wed on June 2, 2012, in Gold Canyon, Ariz. The bride is a 2000 graduate of Kingman High School, and a 2003 graduate of Northern Arizona University with a Bachelor of Science degree in hotel and restaurant management. She is employed as a director of sales and marketing for Texas Western Hospitality in Chandler. The groom is a 1997 graduate of Payson High School, and a 2004 graduate of the University of Arizona with a Bachelor of Science degree in agricultural education. He is employed as a high school agriculture teacher in the Agua Fria Union High School District in Goodyear. The couple will reside in Phoenix with their two dogs, Memphis and Reggie Ray.