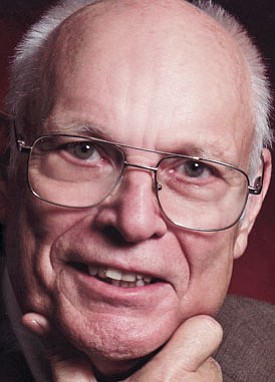 Reverend Jerry A. Pence, 72, of Golden Valley went home to be with the Lord on Sunday, June 24, 2012, in Kingman. He is now seeing Jesus face to face. Jerry was born March 8, 1940, in Springfield, Ohio, to JoAnn Wewera and Wolford Cline "Mickey" Pence.

He moved with his family to West Virginia where he spent his life until he graduated and then joined the Air Force. He married Judith Ann Popejoy from Marshall, Mo., on June 5, 1961. He attended and graduated Calhoun High School in West Virginia, attended Cochise Community College in Sierra Vista, Ariz., and was a graduate of Global University (then called Berean) for his ministerial studies. He was ordained in April 1981 with the Assemblies of God.

From 1963 to 1965 Jerry apprenticed in offset printing before moving to Arizona where he worked in print shops and served for several years as production manager at the Herald Dispatch in Sierra Vista. He also worked as a production manager at the Golden Valley printing plant. God used his trade of printing side by side with ministry over the years. He retired from printing in 2002 from D&L Press in Phoenix.

Jerry was a youth pastor in Sedalia, Mo., and pastored four churches in Arizona; he retired from pastoral ministry in 2009 and moved to their home in Golden Valley. He and Judi were honored to serve as honorary associate pastors ministering in the early traditional service at Hilltop Foursquare. He was an ordained minister with the Assemblies of God in Arizona. He loved most of all studying the Word and writing a daily blog on their ministerial website that received an average of 1,000 hits per day.

Being a father and grandfather was his greatest accomplishment. He is survived by his wife, Judith Pence of Golden Valley; his children, Jerry Allen Pence Jr. (Rhenda) of Texas and Elisabeth Renee Pence Schad (Dan) of Phoenix; grandchildren, Destiny Rose Schad, La Tricia Ann Schad, Jonathan Robert Pence and David Joshiah Pence; sisters, Ruth Wright of Spencer, W.Va., Francine Hall of Parkersburg, W.Va., Donna Diane from Ohio and Mary Jane Fowler from West Virginia; one brother, Richard Kyer from West Virginia; many nieces, nephews, cousins and friends; pets, and his buddy Joey Kat. He was preceded in death by one sister, one brother, and his mother, father and stepfather.

The service will be at 11 a.m., with viewing at 10, Friday, June 29, 2012, at Hilltop Foursquare Church, 2215 Emerson Ave., Kingman, with Pastor Norm Taylor officiating. Interment will be at Mountain View Cemetery, 1301 Stockton Hill Road. Sutton Memorial Funeral Home will handle the arrangements.

Jerry's favorite verse: Psalm 17:15 - As for me, I will see Your face in righteousness; I shall be satisfied when I awake in Your likeness.