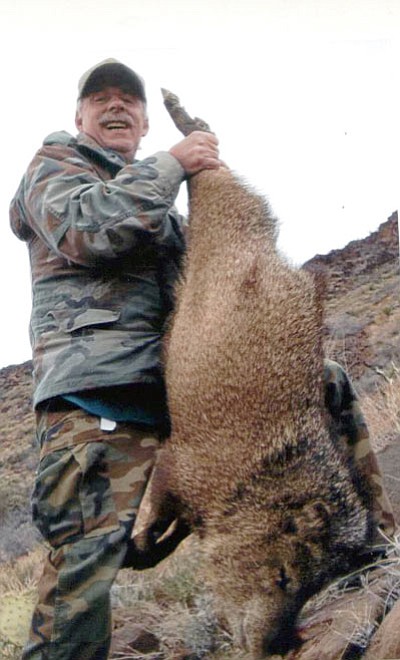 From all the reports I've heard, it seems like most of the local javelina hunters did well on the recent HAM (Handgun, Archery and Muzzleloader) and general rifle hunts in Mohave County.

Greg Holden, his son Devin and Jim McCain all bagged pigs within the first two days of the HAM hunt in Unit 18B using pistols or handguns.

We had 10 hunters in our pig camp for the HAM in Unit 18B and this year, we really got into them.

My brother Gary got a boar with his muzzleloader, along with three of our friends from the Phoenix area. And to make it just a little more interesting, those three guys all used the same rifle! When the first guy got his pig on opening day, he handed it to his friend who promptly got another one out of the same herd of 15.

The next day, the remaining friend using the same .50 caliber smoke pole to bag his pig.

Another of our friends, Geno Sprofera, who used to work at the fish hatchery at Willow Beach, came down from northern California and used a custom Ruger revolver in some crazy wildcat cartridge to bag his first javelina.

There were four of us who used Savage Striker bolt action handguns on the hunt.

I also was using my Striker in 22-250 caliber when I bagged the largest javelina I have ever taken, a boar that weighed 43.56 lbs!

Chan has the same gun and used it to bag a boar, while Hulsey, who had just two days to hunt, borrowed my pistol and took a boar on the last day of the season.

Pierce also used a Striker, but in 243 caliber to take the largest javelina he has ever taken - boar that tipped the scales at 40 lbs.

Normally I have a big pig contest for our camp but this year I did not, and of course I would have won it easily this year. Just my luck! After all the years of donating to Ryan or Jay who always seem to win the big pig contest in the AWO camp, this would have been my year.

During the general rifle hunt in Unit 18B we had four hunters in camp. Alan Chan and his stepson Gabe came from Flagstaff and they both filled their tags on the last day they could hunt.

I had the pleasure of hunting with my good friends State Representative Jerry Weiers and his daughter Chrissy.

I've been friends with them for many years and they are a lot of fun to hunt with.

During the two days I hunted with them, we saw just one group of five pigs and Jerry got his pig while Chrissy forgot to take the safety off her rifle at the moment of truth and didn't fill her tag.

Kingman resident Dr. Bill Connelly and his son Will along with a friend from Phoenix camped just down the road from us and had some luck. The first time pig hunter got a pig. According to Dr. Bill, he got into a "shootout" with some pigs, but they won again!

A group of hunters who are in the Mohave County Search and Rescue were camped down the road, and at last report four out of the seven of those hunters had also bagged pigs.

Speaking of the Mohave County Sheriff's Department. It was nice to see Officer Branden Lawrence out there on patrol. He was making contacts with hunters to make sure there wasn't any litter left in their camps and just to let them know he was out there if they needed any assistance.

Speaking of law enforcement, I heard that Steve Iker, the Game & Fish Dept's Off Highway Vehicle law enforcement specialist for Region III, was out there on patrol checking to make sure that the OHV and game laws were being obeyed.

I didn't get to meet him personally, but those I spoke to say Iker was very professional and seems like a nice guy. Welcome Steve!

He also told several of the hunters that overall there seemed to be a lot of success on the rifle hunt.

Javelina hunts are one of my favorite hunts. I get to hunt close to home and they are a challenge to find with good optics.

While the herd sizes of the pig herds that we saw in the unit seemed to average between four to six animals, we did see one group of 18 pigs, and another herd that had 10 pigs.