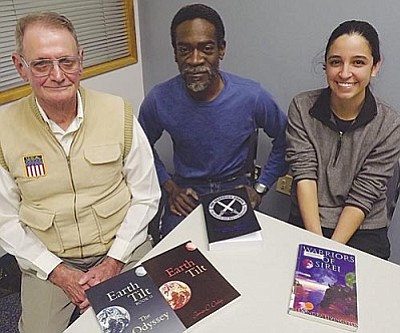 KINGMAN - Local author Alexandra Livingston said the same active imagination that helped her write several books can sometimes get her in trouble.

"I never stop. I'm always thinking about my writing," Livingston said. "I'll be at work thinking about the ending credits for my movie that may never be made."

Livingston, who describes herself as having contagious perkiness, recently released "Falling Sun" - part two of a two-part young adult fantasy story ("Rising Moon" was the first installment). She, along with four other local writers, will take part in an authors panel at the Mohave County Library in Kingman. There, Daryl Edwards ("The Guardian Corps"), James Dailey (the "Earth Tilt" series), Michael Esser ("The Deadz"), Elva V. Medina ("Realmwalkers") and Livingston will share pieces of their stories, talk about the pain and pleasure of the writing process and offer advice to aspiring authors.

The library's Adult Programs Coordinator Shannon Samson along with Circulation Supervisor Kristi Turman organized the panel in order to bring people interested in the writing process together with different types of local authors.

The event brings together writers of horror, science fiction and fantasy. Essentially, this group of authors spans the fantastical spectrum. From Dailey's end-of-civilization-as-we-know-it story of Earth's tectonic plates all shifting at once; Edwards' tale of an Earth-like planet 40 light years away with a one-world, non-secular government; Esser's Kingman-based zombie apocalypse, Medina's what-am-I-doing-on-this-planet fantasy epic; or Livingston's god/goddess duality affecting the people of a hidden village, there's no shortage of unique ideas among this group.

Along with their colorful imaginations and commitment to their stories, this group - for the most part - markets their novels, too. Each writer tackles marketing differently, yet shares a common goal with each other - they want people to read their stories.

For Medina, marketing has been a source of heartache. One aspect she struggled mightily with was taking her story - which is full of her original artwork - and putting it into Kindle form. After trying and failing several times to format her artwork to not only work with Kindle but to look as good as it does in print, Medina decided to remove most of it from the e-version.

"It just wasn't worth it to bring the illustrations into e-book form," Medina said. If people want to just read the story, the e-book is perfect, but if they want the artwork that goes along with it, they'll need to buy the printed version, she added.

The marketing of "Realmwalkers" is all on Medina, which hasn't left her much time for writing.

"It's killing a lot of my time," Medina said. "But I am making progress."

Livingston, who continued to scribble words in her notebook while she fielded questions from the Miner, takes a slightly less-stressful approach to marketing her books. She takes homemade bookmarks that reference her stories to local retail establishments and slips them into for-sale books of similar genres.

"I self market for fun," she said, adding that she finds ways to increase her Google presence as well.

It's well documented that to be a writer you must write day in and day out. It's no different for these five authors.

The hardest thing for Dailey is the first line.

"I have all these idears," Dailey said. "But where do I start?"

While with the National Parks Service, Dailey worked with archaeologists at the Blue Mesa Reservoir in Colorado. One day while on his lunch break, Dailey began daydreaming about where all the water would go if Earth's tectonic plates all shifted at once, leaving east and west and nothing in between. He put this daydream to paper six months later, starting a process he has yet to complete.

Edwards, who wanted to write a book ever since he could read, explores how a one-world, non-secular government would deal with the search - or lack thereof - for life outside of its planet. The history of the planet within "The Guardian Corps" is told through the memories of the characters and often pushes the narrative forward. The type of detail Edwards uses is not the type of stuff that just happens - it must be thought out, reworked, put to paper and reworked again.

With the story demanding so much of his attention, Edwards said he became in tune with the world he created.

"When I'm not writing about it, I get salty," Edwards said.

Livingston sees her books as her babies, and explains that fear cannot prevent the author from writing.

"Each day of writing is another step forward," she said, adding that it's the only way to ultimately get what she's seeking - publication by a major publisher, national recognition and widespread access for kids to her stories.

All of the books mentioned here - excluding "Earth Tilt" - are available for check-out at the library. Dailey's books will be available soon as well.

For writers in the community faced with navigating the obstacles between ideas and finished products, the Kingman KABAM (Kingman Area Books are Magic) offers networking opportunities. You can either download the Kingman KABAM application for your smart phone or tablet or visit the group's website, www.KingmanKabam.org, for more information.

If interested in hearing about these authors' written stories, come down to the Mohave County Library in Kingman, 3269 N. Burbank St. The event takes place from 6-8 p.m. March 21.