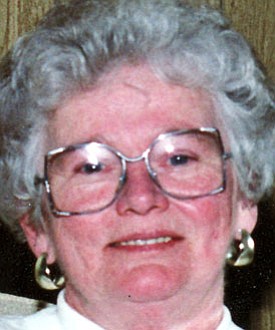 Frances I. Pemberton Adams, 77, of Kingman passed away peacefully at home on Wednesday, March 14, 2012, with her family. She was born Sept. 17, 1934, in Michigan to parents, Charles and Alystia Beery. She came to Arizona in 1954 with other members of her family and her two small children, Mike and Renee.

Frances found a job at the Alamo Mine cook shack where she met and soon married Howard Pemberton. Together they purchased land in the Big Sandy Valley (Wikieup) area and began building a home and establishing a ranch. Clint and Lori were born within a few years, and Howard's son Bill spent a lot of summers with the family on the ranch. Frances was well known as the school bus driver, picking up kids all along the river and taking them to school in Wikieup where she also helped out once they arrived at school, and was a board member for a time. With some medical training, she was often called upon by anyone who was ill, and was known as the local bookkeeper. Frances was always willing to help in any situation. She was a member of the Wikieup Bible Church, and has always had a very strong Christian faith, which she made every attempt to instill in her children.

Frances is survived by her children and their spouses, Mike Pemberton, Renee (Leonard) Hagen, Lori (Leonard) Cornwall, all of Kingman, and Clint (Ella) Pemberton of Buchanan Dam, Texas; her siblings, Doris Carlisle, Barbara Wyse, Judy Crockett, Richard (Anita) Beery, Sharon (Mel) Haugan, Carol Pope, all of Phoenix, and Jack (Susan) Beery of Pasadena, Calif. She will also be dearly missed by her 14 grandchildren and 24 great-grandchildren.

Services for Frances will be at 10 a.m. Saturday, March 24, at College Park Baptist Church, 1990 Jagerson Ave.