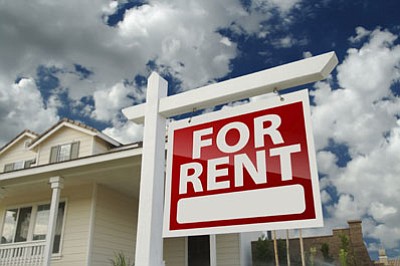 Two bills moving through the Arizona Senate and a third signed by Gov. Jan Brewer have caused quite a stir among renter's rights activists, but a local property manager said most of these changes have been in place for years.

House Bills 2128, 2129 and 2200 deal with the Arizona Residential Landlord and Tenant and Forcible Entry and Detainer acts.

HB 2128 expands the definition of a property abandoned by a renter to include when a tenant gives proper notice to their landlord that they no longer wish to rent regardless of whether they have returned the keys or not.

The current law considers a property abandoned by a tenant after the renter has been absent from the property for at least seven days, the rent is 10 days past due and there's no evidence anyone is living in the property other than the renter's personal belongings.

A property can also be considered abandoned under the current law if the tenant has been absent at least five days, if the rent is five days past due and there is no personal property in the unit.

HB 2128 also allows a landlord to enter the property once he has the keys and dispose of any of the renter's personal property that might be left in the unit, unless the landlord and the tenant have an agreement in writing stating that the landlord may not do so.

In this case, the landlord must take photographs or a video of the unit to document the condition of the unit when they entered it.

HB 2128 also states that a landlord does not have to hold on to a tenant's pets, plants or perishable items such as food.

Organizations such as the William E. Morris Institute for Justice argue that HB 2128's broad terms of "reasonable person" and "material value" open the bill up for abuse by unscrupulous landlords.

According to the institute, under this bill a landlord could enter a rental unit without notice, throw out the tenant's personal property including plants and food, put their pets on the street and take control of the unit.

"A landlord can simply claim there was nothing of 'material value' in the unit," the institute states in a news release. It also points out that photographs and videos can be altered.

Proponents of the bill state that it is necessary because some renters leave the keys in the unit instead of returning them to the landlord and they need to enter the unit to see if the keys are there.

The remedy for the situation is to either obey the current law and wait five days and then enter the unit with proper notice or tell the tenant that they will continue to be charged rent until the keys are returned, Ellen Katz from the Morris Institute stated in an email.

The institute recommends adding two amendments to the bill. The first amendment would require a landlord - if the keys have not been returned to them and the tenant has provided them with written notice that they are moving out - to wait at least five days after the rent is due before posting a notice that they plan to enter the unit and then they may only enter the unit to determine if the tenant is still living there.

The second amendment would require the landlord to contact a local animal shelter to come pick up any pets left behind.

The bill is currently on the Senate's consent agenda.

Remax Property Manager Helena Baughman said she hasn't read the full bill, but it sounds as if the bill doesn't give landlords or property managers any new powers. Under the Landlord and Tenant Act, landlords have always been given the option of adding clauses to their rental contracts that allow them to enter a unit to see if it's abandoned and dispose of items left behind, she said.

Most property management companies include such clauses in their contracts, she said. It protects a landlord who may find themselves in a pickle if they have already rented a unit and the current resident hasn't turned over the keys or completely moved out 30 days after giving their notice.

The act also dictates how a landlord can dispose of any property left behind by a tenant, Baughman said.

Brewer signed House Bill 2129 on March 27. It states that when a renter calls their landlord and makes a request for a repair, the tenant waives their right to be notified when the landlord will enter the building to make the repair.

The current law requires landlords to notify renters when they will enter their unit to make repairs.

Proponents of the bill say the change is necessary because landlords sometimes have to reschedule maintenance appointments because they cannot reach the renter to notify them of the appointment.

The Morris Institute states that many renters want to be in their unit when a repair is made or in the case of spraying for pests, they may want to be alerted so they can remove any pets or children.

The institute recommends changing the bill to allow a landlord to enter the property at reasonable time and date agreed upon by both parties.

The bill appears to change the current law that requires that a landlord notify a tenant 48 hours before a repairman arrives, so that repairs can be made quicker, the value of the property is protected, property management companies aren't dinged for service calls that aren't fulfilled and the inconvenience to the tenant can be eliminated, Baughman said.

Baughman said she could see the other side of the argument. She certainly would want to be home when a repairman arrived to fix something. That is why the repair process in her office is to call a repairman and then give them the tenant's phone number so they can make an appointment that is most convenient to the tenant.

House Bill 2200 would change the amount of bond a person must put up in order to stay in a rental unit while appealing an eviction case.

The current law requires a tenant appealing an eviction and wanting to stay in the unit until the appeal is finished to post a type of bond in the amount of the rent that is due plus court and attorney's fees every month.

The bill would change this to require tenants to post the rent and court fees or the amount due to the prevailing party in the lower court, whichever is greater.

Opponents of the bill say it makes it harder for tenants to stay in the unit while an appeal is pending and could discourage renters from filing appeals.

The sponsor of the bill, Rep. Steve Urie of Gilbert, has claimed that the changes are designed to make the terms in the current Landlord and Tenant Act consistent with the state's Forcible Entry and Detainer Act.

The Forcible Entry Act allows a landlord to evict a tenant through court proceedings after the tenant is given due notice to leave the rental unit. The act does not state that a tenant appealing an eviction needs to post both the rent and the lower court monetary judgment.

Tenants are welcome to appeal eviction rulings, but landlords that win eviction cases shouldn't have to wait to receive the compensation the court awarded to them, Baughman said.

The bills will protect tenants as well as landlords and property management companies, because landlords will have to follow these rules as well, she said. She's known numerous private landlords who have found themselves in trouble after renting directly to a tenant because they didn't read the Landlord and Tenant Act.