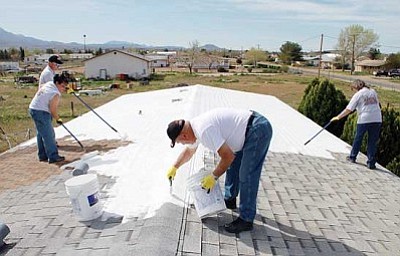 KINGMAN - David Neely, a 72-year-old disabled Army veteran who lives alone, purchased a roof 11 years ago that springs leaks from time to time.

Less than a month ago, many will remember a particularly nasty storm that cut power to some homes and knocked fences down. During the deluge, the roof sprang so many leaks that Neely felt like one of the Beverly Hillbillies, scrambling throughout his mobile home frantically trying to get pots and pans under the invading water.

It was time to get the roof fixed, but Neely didn't have the money to do it.

Neely contacted Ginger Gates, the executive director for the American Center for Educational Opportunities. The ACEO is a nonprofit organization dedicated to building community networks and rural alliances in order to develop outreach projects that improve the quality of life and promote safe and comfortable housing for people in need who live in rural desert communities.

The organization, which has been in the tri-state area since 2009, currently has the Green Cactus Project. In Kingman, the project is an alliance between the ACEO and several companies, including The Home Depot. The goal of the project is to help veterans over the age of 65 get their singlewide and doublewide mobile homes - which were bought years ago and are now falling apart - in better shape. Gates explained that the ACEO purchases the materials through grant funding, and the companies such as The Home Depot provide the volunteer labor.

In fact, The Home Depot, which did Neely's roof Thursday, has committed to work on one home a month for the next year, she said.

"It's a great obligation from Home Depot," Gates said. "I'm thrilled to have them as one of our partners."

Tony Maribito, The Home Depot's local manager, said the company gave ACEO a $3,000 grant. But his staff's contribution doesn't stop there, as he and three others patched Neely's roof on their own time.

The Home Depot is a community-minded organization, Maribito said. Nationwide, the company set aside $30 million for veterans, and is in the process of hiring 60,000 people, he added.

"We're here on our own time," Rule said. "About 15 people were signed up for this project, but many of them had to work today."

For Barnes, volunteerism is nothing new. She's been doing volunteer work since her teens, but it's usually been on her own. She enjoys the fact that The Home Depot encourages its employees to help out in the community.

"I love to volunteer," Barnes said. "I'm proud to be an American and help when I can. This is another way to say thank you to the veterans."

Martin didn't expect to work on Neely's roof when she went to work Thursday morning, but after realizing there weren't enough people for the job, she decided there was enough coverage at work to take the day off to lend a hand.

"I'm going to be sun burnt, but it's all good," Martin said jokingly. "Kingman is in need, and the community probably needs to do more."

The Home Depot wants to have the No. 1 customer service in the country, and it takes participating in projects like this along with community connectivity to do that, Maribito said.

If you're 65 or older, spent at least 90 days in the military, received an honorable discharge (if you're no longer in the military), live in the Kingman area fulltime and need help with mobile home repairs, you can call Gates at (702) 299-1183. She will assist you in any way she can. You can also visit www.amceoinc.org to learn more.

As for Neely, with his new leak-proof roof, there's nothing but appreciation on his mind.