Kingman students vie for spots in Move On When Ready 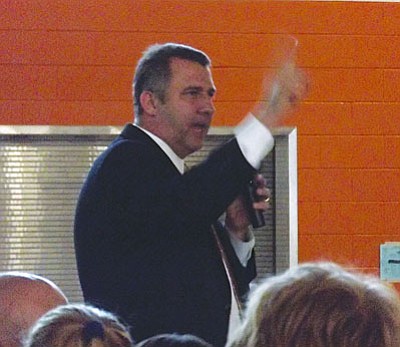 AHRON SHERMAN/Miner<br>State Sen. Rich Crandall explains Move on When Ready and Cambridge Preparatory Academy to an auditorium full of KUSD students and their parents in March.<br /><br /><!-- 1upcrlf2 -->

KINGMAN - When the Kingman Unified School District decided to send out a Cambridge Preparatory Academy interest survey in February, the idea was to find out how far the program should reach in its first year.

The district held a parents' information night at White Cliffs Middle School about a month after the surveys went out, and parents and students eager for information packed the auditorium. When the initial deadline for applications passed, the district had more than 300 students trying to get into the program - a far cry from initial expectations of 100 or so applications.

These factors combined showed KUSD that interest in the program is strong.

With that in mind, it was decided that the interest shown warranted Cambridge opening at Kingman Middle School, WCMS and Lee Williams High School.

The Cambridge program is Kingman's implementation of State Sen. Rich Crandall's 2011 "Move on When Ready" legislation. It is designed to offer students a rigorous and relevant curriculum that prepares students for the Grand Canyon Diploma and opens academic pathways designed to get students ready for careers and college. Within Move on When Ready, emphasis is placed on allowing students to progress at their own pace rather than calculated seat time.

Over the last couple of weeks, parents of students who applied received notices in the mail informing them whether or not their children made the grade. White Cliffs will have a 6th-grade Cambridge class of 27 students, 43 students were approved for the school's 7th-grade class and 30 are set for the 8th-grade version. At KMS, 6th-grade Cambridge will have 32 students, 33 students for 7th-grade and 22 for 8th-grade. The Lee Williams High version of the Academy will include 64 students.

Cambridge Coordinator Jack Burden explained the system - which has a maximum score of 20 - used to decide whether or not students who applied were admitted to the program. Grades carried the most weight in the scoring system. Students with straight A's received seven points while applicants carrying a B-average received four points. Anything lower than a B-average meant students received no points for their grades, Burden said.

The next most important aspect of the scoring system was the essay. Applicants wrote about the qualities that make a good student. An excellent essay garnered five points, a good one was worth four points, and average tale offered three points and anything rated poor received between 0-2 points.

"We wanted to give students as many opportunities as possible," Burden said.

Kids who earned 12 points were admitted to the program, Burden said. Anything lower meant a denial letter was coming home. Most students who applied scored 15 points or more, Burden explained.

When applications missed the cut, they were re-evaluated by a different group of people, Burden said.

Since there was such a strong response, KUSD continues to accept Cambridge applications. Students who were denied can even re-apply with a new essay and a better report card - if they have one.

At Lee Williams High, Kris Olson will teach science, Cheryl Massey will teach social studies and Kevin Matthew along with Michael Wilt will teach math. A teacher for language arts has yet to be found, Jacks said.

Since so many students were approved for the program at LWHS, chances are good that teachers will need to hold two versions of the same class, as the district doesn't want more than 32 in a Cambridge class.

Students who wish to apply again next year should concentrate on keeping their grades up and making it to school every day, as strong marks in these areas are worth as much as nine points, Burden said. That's only three points short of being accepted.