Secrets of the Desert movie to premiere at Hot Rod Caf&#233; in Kingman 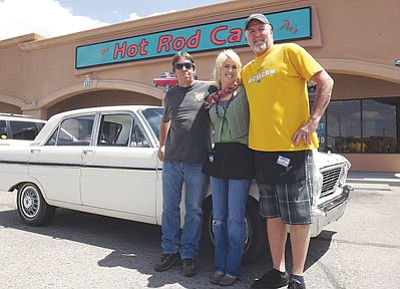 KINGMAN - "Secrets of the Desert," a short film written by Kirk Slack and shot in and around Kingman, premieres Saturday at the Hot Rod Café.

Slack owns Out West Family Films, a local production company that's been in business since 2009. "Secrets of the Desert" is the company's first film that's not a documentary or music video.

The movie, which stars local actors Les Patty, James Smith and James Osborne, is a mystery/thriller reminiscent of "The Twilight Zone," Slack said. Osborne plays protagonist Falcon Eddie and drives around the desert in a 1965 white Ford Falcon. Though Slack wouldn't disclose too many details of the film, it is known that the last scene of the movie takes place in the old west while the majority of the film takes place in modern times.

The fun begins at 6 p.m. at Ma and Pa's Hot Rod Café, 2215 Hualapai Mountain Road. The evening starts with the opportunity to meet and converse with all the people who put the film together, including the actors, Slack said. He encourages anyone interested in the movie business to come to the event, as networking opportunities will be bountiful. The film, which is about 44 minutes long, starts at 8 p.m. and will be shown on a 6-foot-by-6-foot screen on the patio.

Out West Family Films' first three movies were documentaries - one about Chloride, one about off-the-grid tourist locations (mines, ghost towns, etc.) and another about Route 66 in Arizona. The company has done several music videos for European bands as well. Also, when other production companies are filming in the area, Slack said Out West Family Films is often called upon for production assistance.

Slack submitted "Secrets of the Desert" to the Laughlin Film Festival, which takes place in the fall, last week but hasn't heard anything back yet.

To learn more about the company and what it offers, visit www.outwestfamilyfilms.com or call Slack at (928) 565-9755.