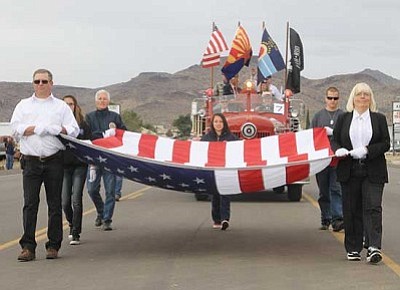 JC AMBERLYN/Miner<br /><br /><!-- 1upcrlf2 -->Flags were a big part of the 2011 Mohave County Veteran’s Day Parade, and they’re sure to be featured prominently at this year’s parade, which starts at 11 a.m. Saturday on Northern Avenue.

KINGMAN - With more than 77 entries, Saturday's Ninth Annual Mohave County Veterans Parade is sure to be a spectacle.

The parade starts at 11 a.m. Saturday near the corner of Northern Avenue and Van Nuys Road.

From there, the line of veterans organizations, vehicle clubs and first responders will make their way down Northern, where it will hang a left on Bank Street and head down to John L Avenue and stop at the Veterans of Foreign Wars Post No. 10386.

"It's a real joint effort this year," said Lydia McKenzie, the parade's assistant coordinator. "They're all involved."

From all the local veterans organizations to the Nellis Honor Guard, the Patriot Guard Riders and the Desert Road Riders, the array of entrants is vast.

But the fun doesn't end with the parade.

At the end of the route, the VFW Post No. 10386, 3036 John L Ave., is hosting an open house. There will be grub, live tunes, games for the kiddies and an inflatable bounce house, McKenzie said. The public is invited.

What the public isn't invited to is the biscuits and gravy breakfast for all the parade participants being offered at the VFW the morning of, she said.

After their bellies are full, they'll start lining up the entries for the parade.

McKenzie said parade organizing began in July, but she thinks it should've started as early as February. Through spaghetti dinners and yard sales, the VFW raised money to put on the event, she said.

"I get a lot of enjoyment from seeing people help with the fundraisers," she said. "There's been an excellent response."

The money raised was used for advertising, printing and gas to get around.

"Trying to get the word out can be difficult," she said. But everybody pitched in and it's going to be a success, she added.