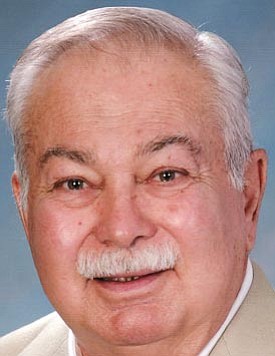 Ten people submitted letters of interest for the late Bill Goodale's vacant seat on the Kingman Unified school board, including current board president Pat Carlin, who has missed more than half of the board's meetings since May.

But you can scratch Bruce Ricca's name off the list of applicants. As of Friday, the Mohave County general election results were unofficially finalized - the Board of Supervisors just needs to put its stamp of approval on them - and Ricca won a school board seat by 29 votes over Kevin Burgess. Burgess submitted a letter of interest for the vacant seat as well.

"I think everybody that submitted a letter of interest needs to be considered for the vacant seat," said current board member Laurie Voss Barthlow.

Though Carlin has 15 years of experience on the board, he's missed five of the nine board meetings since May. He had decided not to run for one of the two seats available through the election, but Goodale's unexpected death changed things.

Carlin did not respond to multiple requests for comment before deadline.

He is not a shoo-in for the spot. In fact, no one is, said KUSD Superintendent Roger Jacks.

One of the reasons the board may decide to bring Carlin back into the fold is his experience, Jacks said.

"It takes a while to get up to speed as a board member," Jacks said.

With budget season looming, Carlin's experience could definitely play a role in the board's decision. The flip side to that is that someone new could possibly bring a fresh set of eyes to the discussion, he said.

A special meeting is scheduled for 10 a.m. today at 3033 MacDonald Ave. to look at the candidates, but it's unclear whether or not a decision will be made.

There's a chance the board won't want to make a decision until the Mohave County Board of Supervisors canvass the election later this month.

"There's quite a lot riding on this," Voss Barthlow said.

Mohave County School Superintendent Mike File has the final say on the decision. Although state statue says the board can submit up to three names for consideration, File has asked for it to submit only one. The person the board suggests will be the one that gets the job, he said.

"It puts the decision in the hands of the board," File said.

Here are the others who submitted letters of interest:

• Ted Roper, who ran unsuccessfully for the District 4 Board of Supervisors seat.

• Alan Palomino, the assistant chief probation officer in the adult division of the Mohave County Probation Department in Kingman.