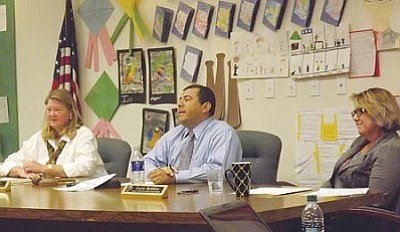 AHRON SHERMAN/Miner<br> Kingman Unified school board members Jeri Brock, Charles Lucero and Laurie Voss Barthlow consider how to go about selecting one of the 10 applicants to fill the vacancy created by Bill Goodale’s death.

It'll be another week before the Kingman Unified school board decides which candidates it's going to interview for the board's vacancy, a position that has two years of a four-year term remaining.

The three KUSD board members who showed up to Monday's special meeting decided to take a week to individually look through the 10 letters of interest submitted last week for the vacant board seat, select three candidates and come back Nov. 27 to pick the candidates who will be interviewed and formulate the process.

"It makes sense to narrow the list down a little instead of interviewing each one," said Charles Lucero, the board's vice president.

Roger Jacks, the district's superintendent, recommended the board follow a formal interviewing process that resembles what the district uses when it interviews potential employees.

That would include asking the same set of questions to each applicant interviewed and developing a scoring rubric based on those questions.

"It can help the decision-making process," he said.

Board member Jeri Brock agreed that conducting interviews is the appropriate way of proceeding, but she wasn't sold on creating a rubric.

Her colleague, board member Laurie Voss Barthlow, said she feels very strongly about conducting interviews and sticking to the process the board comes up with next week.

"I don't know everybody here," Voss Barthlow said of the 10 applicants, adding that a formal process will help the board make the best decision.

But what exactly that process will be is a discussion the board will save for Monday.

The board also wants to wait for the Mohave County Board of Supervisors to certify the general election results on Monday before it makes any concrete decisions.

The final tally had the two seats that were at stake going to Voss Barthlow and Bruce Ricca, but third-place vote-getter Kevin Burgess lost by less than 30 votes.

Both Ricca and Burgess submitted letters of interest for the vacant seat.