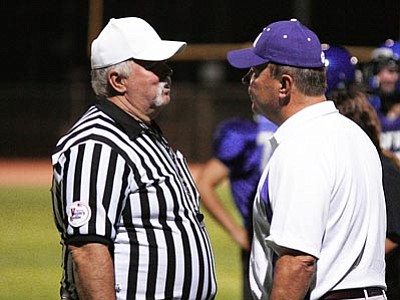 Odum was due to return from a one-week suspension he served for unspecified reasons but instead offered his letter of resignation to KAHS principal Jeff Martin.

"I'd like to say that even though I had differences with the administration, it was my demeanor which ultimately caused problems," Odum said. "Jeff and Shawn are good guys and I consider them my friends."

KAHS athletic director Shawn Byrne would not comment on the situation. Odum also is a science teacher at the high school.

Assistant coach Wally Mueller, who served as acting head coach last week in the Tigers' 41-0 win over Desert Hills, will take over on the field. Assistant coach Bill McCord will handle administrative duties for the team.

"We are going to continue where we left off on Friday night and keep playing football and staying the course and win as many games as we can," Mueller said. "The staff is what's left over from Coach Odum's staff and we have no ill regards for him and wish him the best. It was a decision that coach Odum made and that's his deal."

Players were informed of Odum's decision at Monday's practice. According to Mueller, they were a little upset.

"We are going to move on," Mueller said. "We didn't make a big deal out of it so they wouldn't and reminded them that their job is to play football. We talked about it for about three minutes and that's it."

Neither side would comment publicly on the reasons for the resignation.

There have been tensions this season, however. Odum hasn't been satisfied with the level of competition in the Charter Athletic Association and felt the school should move to the more challenging Arizona Interscholastic Association.

He also insisted the team wear their school Polo shirts when traveling and eat at a proper restaurant after road games. Before Odum, the team dressed casually when on the road and usually ate pizza in the parking lot before loading onto the bus for the trip home.

"He brought a lot of good things here and he's always had a positive attitude and I'm going to be in a better position to coach these kids," Mueller said.

Last week, during the Tigers' trip to Gilbert for their game with Desert Hills, the team ate at the same restaurant they'd visited the week before, Mueller said.

Because of how well the team behaved and how well-mannered the players were, the manager of the restaurant stayed open well past closing to accommodate them.

"Everywhere we stopped on the way to Desert Hills last week, we were complimented on the boys' appearance, their demeanor and their manners," Mueller said.

"That speaks highly for the kids, the school and the town they come from. It also speaks highly of the kind of class these kids are learning and coach Odum brought it."

Odum was in his first year as Tigers head coach after replacing Eugene Kramer, who resigned in May to accept the new head coaching position at Lee Williams High.

KAHS (5-1) opened the season on Sept. 1 with a 60-0 win over Desert Hills and followed it up with a 17-0 win over Westwind Prep before falling to Southpointe on Sept. 14. Since the loss, the Tigers rebounded with wins over Peoria Accelerated (27-0), American Leadership (6-0) and last week's win.

This week is the Tigers' Homecoming as they prepare for a rematch with Phoenix Southpointe at 7 p.m. Saturday at Southside Park.

"This season has been filled with distractions with the likes I've never seen, and hopefully this will be the end of it," Mueller said. "We are just focusing on football and going on from here."