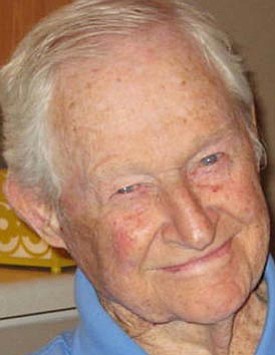 Born June 3, 1920, in Chicago, Russ grew up with his three brothers and one sister in Franklin Park, Ill. As a boy during the Depression, Russ worked as a golf caddie, earning a dollar for a round of 18 holes. His love of golf, which stayed with him his entire life, started from this experience.

Russ graduated from Leyden High School, where he met his first love, Olwen Matthews. On June 6, 1941, they were married in Tucson, Ariz., just before Russ shipped out to England, where he spent four years in the Army Air Corps. At the end of World War II, Russ returned to Ollie in Illinois, where he took a job at Bell Telephone and they began their life together.

Russ and Ollie were blessed with three children, Rusty, Linda and Skip. In 1957, with a job opportunity at AT&T in Kingman, the family moved west, arriving on the Fourth of July in their station wagon packed with kids and animals and towing a U-Haul with the bare necessities.

Over the years, in addition to his jobs with AT&T and later with Citizens Telephone, Russ and Ollie opened and operated several businesses in Kingman, which included Petry's House of Fashion, Petry's Shell Station, Kingman Refreshment Center and two Mode-O-Day stores, working together until Ollie's death in 1983.

While attending a Leydon High School reunion in the early 1990s, Russ became reacquainted with a classmate, Elaine Woodrum. They soon began a wonderful second chapter for both, marrying in 1993 and enjoying an adventurous life of travel and split residency between Illinois and Arizona until Elaine's death in 2009.

The Petry family extends their deep gratitude for the loving friendship and care their father received from the kind people of Grace Lutheran Church, The Gardens Rehab and Assisted Living Centers, Stansell/Hughes Care and KRMC Hospice.

Following a private service, the family requests that you join them for food, friendship and remembrance from 1 to 3 p.m. on Saturday, Oct. 27, 2012, at 2601 Golf Drive.

Russ Petry was an honest, kind and humble man who lived his life by The Golden Rule and described his life in six words: I am a very fortunate man.