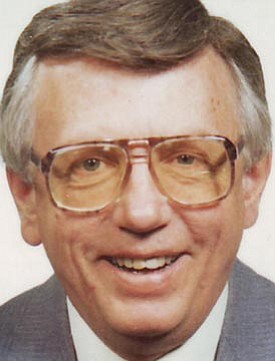 Ronne Leslie Fiddler, age 83, of Kingman died peacefully on Sunday, Oct. 21, 2012, at the Lingenfelter Center of renal failure. Ronne was born on Dec. 6, 1928, in Buffalo, N.Y. He was the son of the late Hilder A. and Joseph A. Fiddler and the brother of the late Wayne A. Fiddler, the late Lois A. Swim and of Martha A. Ferguson.

Ronne graduated from Kenmore High School in 1946 and shortly thereafter joined the Marine Corps, where he was honorably discharged after two years of service.

Ronne left Fiddler and Co. CPAs in 1980 to pursue other business opportunities. He relocated to Kingman in 1986, started Fiddler CPAs and worked there with his son, Eric Fiddler, until his retirement in 2002. He always thought of his clients not as clients, but as his friends.

Ronne was an avid golfer. He was also a life-long member of Rotary Club in both the town of Tonawanda, N.Y., and then in Kingman, and was a member of the Masonic Lodge and the Kingman Elks Lodge.

He is survived by his daughter, Linda F. Edelman and her husband Raymond H. Edelman of Weston, Mass.; his son, Eric P. Fiddler and his wife Maria L. Fiddler of Kingman; his grandchildren, Alexander M., Andrew D., and Matthew L. Edelman and Sarah E. Fiddler; his sister, Martha A. Ferguson of Palm Coast, Fla., and his ex-wife, Barbara T. Fiddler of North Tonawanda, N.Y.

He was predeceased by his brother, Wayne A. Fiddler of Milford, Conn., and his sister, Lois A. Swim of Palm Coast.