Check regulations before heading out to hunt doves 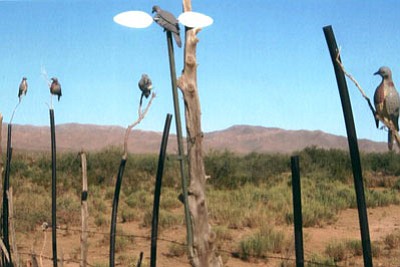 DON MARTIN/Special to the Miner<br> Dove hunters sometimes use decoys to lure birds in. This setup was located at a stock tank north of Kingman.

For local hunters who went out to try and bag a few doves, the season so far has turned out to be a big disappointment.

Dove season opened on Sept. 1 throughout the state.

Most of the hunters I've spoken to said they got just a few birds. One hunter, Rad Green, said he got a limit of 10 birds, but he had to hunt until noon on opening day to accomplish that goal. Green said that his two hunting buddies also got a limit of birds.

I spoke with another hunter in Mohave Valley, which is usually a hot spot for doves in Mohave County, and he said that out of five hunters, the most birds taken by anyone in the group was eight.

The monsoon rains are to blame for the lack of birds in the area.

The rains cool off the desert and offer lots of areas for the doves to water. When the nighttime temperatures drop below 70 degrees, most of the local birds start moving south.

Hunters can take doves 30 minutes before sunrise to sunset. Hunters should check the regulations for their areas to find out exact sunrise and sunset times so they'll know when it's legal to shoot.

Hunters should be able to recognize the different species of doves commonly found in Arizona.

Only mourning doves and white-winged doves have a limit on them. There are no limits for the Eurasian Collared doves, which are considered a feral exotic.

The daily limit is 10 doves per day for mourning or white-winged. The possession limit after opening day is 20.

Other doves found in Arizona include the Inca dove and the ground dove, but both are protected and are not legal to hunt in Arizona.

Hunters over the age of 16 are required to have a valid Arizona Migratory Bird Stamp on their license. Stamps cost $4.50 and can be picked up at any license dealer or at the Region III office. Stamps can also be purchased online at www.azgfd.gov. This stamp also validates your Arizona hunting license for the federal Harvest Information Program (HIP) requirement,

Sportsmen may clean their doves in the field, but they are required to leave one fully feathered wing on the carcass until they reach their final destination.

A common complaint by area livestock operators is that some thoughtless hunters clean and wash their birds in the developed livestock water sources.

This can cause valves to stick open and drain water storage tanks and can actually foul livestock waters, making them unhealthy for livestock and wildlife, which also uses the waters.

Hunters can take doves with a shotgun no larger than a 10-gauge. Shotguns must not be able to hold more than three shells total, as these are considered migratory birds under U.S. Fish and Wildlife rules.

Doves can also be taken by bow and arrow, a crossbow or with trained birds of prey, such as falcons or hawks.

Sportsmen should also remember that shotgun hulls that are left in the field are considered litter. The penalty for that violation can be fines and/or revocation of a hunting license for up to five years.

The season will close on Sept. 15 but will reopen for mourning doves on Nov. 23 and close on Jan. 6.