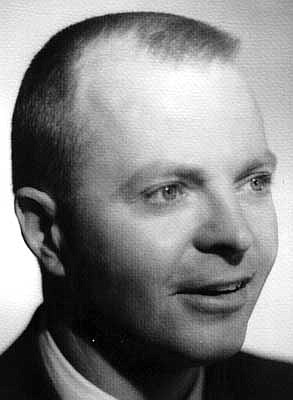 The dynamic, compassionate and nearly famous Edgar David Hazelton passed away on Friday, Sept. 14, 2012, in Avondale, Ariz., and was 87 years young.

Born in Summit, N.J., on Jan. 8, 1925, Ed was one of eight children born to Daniel Oliver Hazelton and Edna Maria Vincent Shea. Ed spent much of his childhood at the local YMCA, perfecting his jump shot and golf swing in preparation for his bright collegiate career. Ed, or "The Haze" as he was often known, excelled as a member of the Drew University basketball team and played both soccer and golf for Springfield College. He also served his country in the U.S. Air Force and was honorably discharged in 1945. At age 27, Ed made a bold cross-country move to Arizona, where he made friends as easily as he cracked jokes and quickly became a partner and later owner of E.T.W. Coulter Insurance and Real Estate. Coulter, or "Uncle Nertz," and his wife Grace became mentors and lifelong friends to Hazelton and his family, and as Ed said, "together they shared a love for both the ancient and honorable game of golf and a frothing glass of cold beer at the end of the day." In 1958, Ed went on a first date with his would-be wife, the fetching Helen Pauline Davies of Kansas City, Kan. He liked her dance moves, she appreciated his humor, and they were partners for more than 50 years. Together they had two beautiful daughters, Paula Kim and Lesli Robb.

Mr. Hazelton was a devoted community advocate and public servant all throughout his life and served as manager of the Avondale/Goodyear/Litchfield Park Chamber of Commerce for more than 20 years.

He was an active member of the Lions Club, a lead organizer of the famous Billy Moore Days Parade and often sat on volunteer boards and committees to help the community he loved.

Ed was also a passionate supporter of the Phoenix Zoo and was recognized with his two daughters as the first visitors to the zoo when it opened in October 1962.

He was well-known around town for his long walks, informative talks and infectious laugh, and was often seen wearing one of his many hats, always with a walking stick or golf club at his side. There were never strangers on any of Ed's walks, only old friends and new friends to make. A passionate conversationalist, Ed understood that everyone had a story to tell, wisdom he passed on to his seven granddaughters, which were the joy of his life. They are Sarah Michelle, Lindsey Anne, Cassie Leigh and Hillary Claire, daughters of Paula Kim Acer (James) of Kingman, and Leah Rachelle, Lauren Kristine and Morgan Amber, children of Lesli Moore. Throughout his life, Ed taught those around him many things: to love the outdoors, to appreciate good food and spirited conversation, to lead by example and to always be learning, because it keeps you both young and inspired. He stressed the importance of hard work and loud praise, and supported every endeavor or adventure those he loved set out to achieve.

He taught us all to laugh frequently, to love our friends and family generously and, above all else, to always follow your heart. His packets, which will remain his legacy, were sent monthly to friends and family containing information that would broaden their horizons, encourage them to dream and hopefully inspire them to act. Ed will be missed beyond measure by his family and friends, but his spirit lives on the hearts of all the lives he made better simply by being in it.

A beautiful celebration of life for Ed Hazelton was recently held at the Phoenix Zoo, which celebrates its 50th anniversary this year. This fall, the family hopes to purchase a bench in honor of Ed's inspiring life and asks that in lieu of flowers, donations be made to the Phoenix Zoo in his name.