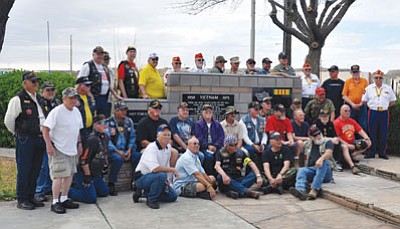 Many of the retired and former military personnel who attended the Vietnam Veterans Day ceremony and celebration pose by the Vietnam Memorial Wall at Locomotive Park Saturday in downtown Kingman. More than 100 people attended the ceremony, which included talks from Arizona State Representative Doris Goodale and Mohave County Supervisors Gary Watson and Joy Brotherton.<BR>BUTCH MERIWETHER/Courtesy

KINGMAN - Retired and former military personnel, interested civilians and dignitaries from the city, county and state levels gathered at Locomotive Park Saturday for the Vietnam Veterans Day ceremony and celebration.

Kingman Vice Mayor Janet Watson read a proclamation from the city that was signed by Mayor John Salem.

According to government records, our country's involvement in Vietnam lasted 5,569 days and it's estimated the average age of our military personnel serving in Vietnam was only 22.

• More than 2,709,918 Americans served during the Vietnam Conflict;

• Of those, it is estimated that only 850,000 are alive today, with 54 being the youngest of American Vietnam veterans;

• 621 people from Arizona were killed in action;

• One out of every 11 Americans who served in Vietnam was a casualty, with 303,644 wounded in action;

• It is estimated that more than 1,800 American service members are still designated as missing in action in Vietnam;

• At the peak of the Vietnam Conflict that was never officially designated as a war, 543,000 troops were serving there at one period of time.

The youngest U.S. serviceman to be killed in action during the Vietnam Conflict was Private First Class Dan Bullock, who joined the Marines at age 14 by altering his birth certificate and graduated from boot camp on Dec. 10, 1968. Bullock died from enemy small arms fire at Hoa Combat Base in Quang Nam Province June 7, 1969, at the age of 15.

According to a Presidential Proclamation designating Vietnam Veterans Day as March 29, President Barrack Obama said, "...The Vietnam War is a story of service members of different backgrounds, colors, and creeds who came together to complete a daunting mission. It is a story of Americans from every corner of our nation who left the warmth of family to serve the country they loved. It is a story of patriots who braved the line of fire, who cast themselves into harm's way to save a friend, who fought hour after hour, day after day to preserve the liberties we hold dear. From Ia Drang to Hue, they won every major battle of the war and upheld the highest traditions of our Armed Forces."

Even though the celebrations in Kingman, Lake Havasu and Bullhead cities were conducted Saturday, the actual day Vietnam Veterans Day designated by the federal government is March 29 and coincides with March 29, 1973, the day the United States Armed Forces completed the withdrawal of the combat units and combat support units from South Vietnam.

In 1982, the Vietnam Veterans Memorial was dedicated in the District of Columbia to commemorate those 58,267 members of the United States armed forces who were either KIA or were declared missing in action in Vietnam.

Many of the various cities in Arizona and military service organizations are in favor, for whatever reason, of making March 30 Vietnam Veterans Day.

"Some city officials and various veterans organizations approached me and asked that I introduce a bill in the state legislature to designate Vietnam Veterans Day in Arizona as March 30," said Arizona State Representative Sonny Borrelli. "I told them that I wouldn't do it as long as the National day of celebration is March 29."

There is currently a bill in the U.S. Senate that will make Vietnam Veterans Day an official national holiday.

Fewer than 700,000 Vietnam veterans are alive today
Facts to consider as we observe Vietnam Veterans Day
Veterans Day is important for our country
Participants sought for Veterans Day Parade Nov. 10
Remembering Vietnam: Paying homage to those who served during the Vietnam Conflict