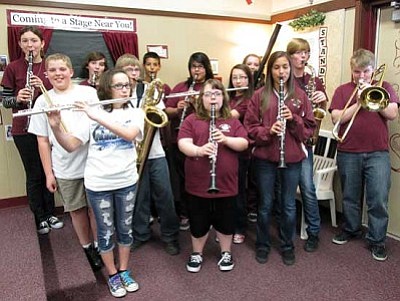 KINGMAN - Julie Gragg isn't shy when it comes to tooting a horn for the bands at Kingman Middle School.

Gragg, music coordinator for the Kingman Unified School District and the middle school's band director, is proud of the 78 students who play in her concert, symphonic and honor bands. And she doesn't hesitate to brag about the recent accomplishments of this year's students in sixth through eighth grades.

Thirteen representatives and three alternates from the middle school will be participating May 3-4 in the Northern Arizona Honor Festival of Performance for Middle/Junior High School Musicians at Sinagua Middle School in Flagstaff. Gragg said the students auditioned and were chosen from nearly 400 northern Arizona students for the 70-member Regional Honor Band.

"We were fortunate enough to have the most representatives from one school for the honor band," said Gragg. "So this is a big to-do. All the other schools had about six representatives. I'm proud of those who made it because it means they're working for success."

Gragg, band teacher at the middle school for 13 years, and her students have seen their share of success this year. On March 2, they participated in the Arizona Elementary/Junior High School Solo and Ensemble Festival in Prescott, where they came home with 20 superior, 15 excellent and two good awards.

On March 16, at the Arizona Elementary/Junior High School All-State Honor Festival of Performance in Surprise, nine middle school band representatives were nominated by statewide band directors as best musicians across the state.

Gragg said her goal is to prepare her band students through practice and competitions for high school band, which is more difficult. Gragg said the band experience even goes beyond that, teaching them how to take instruction and become a focused team.

"We need to prepare these students for the real world," said Gragg. "In band, they learn to cooperate and work as a unit to make great music together. They're going to have to do that as adults, too."

Chase Bell, a 14-year-old eighth-grader, will be playing first chair baritone saxophone at the upcoming Northern Arizona Honor Festival of Performance in Flagstaff. Bell performed last year and is looking for more tips on improving his performance.

"I feel really good about going this year," said Bell. "I got 237 points in my audition, which was up from 162 points last year. That says I got a lot better since then. I'm looking forward to learning from students at other schools. It's going to be fun."

Eighth-grader Alisha Valdez, 14, also is returning to the festival for her second year. Valdez was chosen as third-chair clarinet last year and is thrilled to have increased her standing this year to first-chair clarinet.

Valdez said her audition was nerve-wracking because she made mistakes on several pieces but was able to repeat her performance. When she got her results later, she was relieved and pleased that she hadn't blown her chance to participate this year.

"I am stoked about this," said Valdez. "It's a huge deal for me and the other kids because you get to play with the best of the best. And when you play, it gives you goose bumps because you're so proud to be a part of something like this."