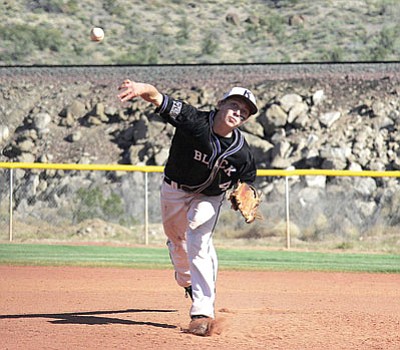 Kingman Academy’s Westin McCord delivers a pitch during the third inning of the Tigers’ Game 2, 20-0 win over American Leadership. McCord pitched a three-inning perfect game, striking out eight. He also had plenty of offensive help – the Tigers belted out six home runs in the game and eight on the day. <BR>RODNEY HAAS/Miner

"You put the ball over the plate, they are going to hit it," McCord said. "They are pretty disciplined. They want to come up and hit it hard and they are disappointed when they don't. I like that about them. They are pretty aggressive."

In two games, KAHS scored 45 runs and pounded out 33 hits in six innings. Both games were called after three innings each.

In Game 2, KAHS hit six home runs, led by Jake Miner's two for a total of eight home runs hit during the day.

After the game, the Tigers' "Murderers row" lineup of Austin Tomlinson, Ty Sherwood, Lane Nielson, Ethan Atkins and Miner joined Tarik Skubal, who hit a home run in the first game along with Sherwood, as they posed for pictures like hunters posing with the day's kill - in this case, home run baseballs.

"They hit the ball well. I don't know what else to say. Everyone hit the ball hard and put it into play," McCord said.

Not to be outdone by the hitting, TJ Pena and Westin McCord faired well on the mound. The duo gave up just one hit on the afternoon.

McCord said they want to finish the season undefeated but don't want to overlook EVAC, which has been known to surprise a few teams.

Black will travel to play EVAC Friday and close out the season May 1 against KAHS Blue.

The Tigers have clinched the No. 1 seed in the upcoming 3A Charter Athletic Association playoffs.

If the playoffs started today, the Tigers would face No. 4 seed West Phoenix, with Southpointe the likely No. 2 seed and EVAC the No. 3 seed.

"I want to keep them grounded. They come out and hit the ball like that, they are going to be tough to beat," McCord said.